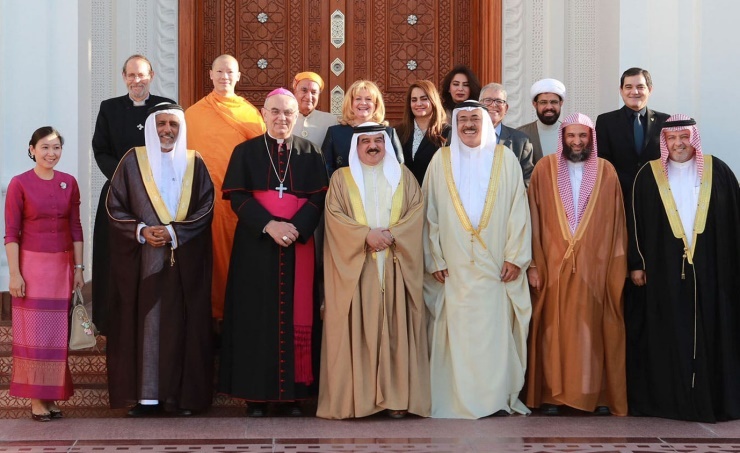 The Kingdom of Bahrain joins the world on February 4 in celebrating the International Day of Human Brotherhood, which is observed in conjunction with the World Interfaith Harmony Week. The celebration is within the framework of the pioneering initiatives of His Majesty King Hamad bin Isa Al Khalifa to promote tolerance and the culture of peace as well as respect of religious and cultural diversity at the local, regional and international levels.

Marking the International Day of Human Brotherhood is in line with the UN resolution, last December, approving a project submitted by the Kingdom of Bahrain, the Kingdom of Saudi Arabia, the UAE, the Arab Republic of Egypt and other brotherly and friendly countries, out of belief in human unity and the importance of fostering inter-religious and cultural dialogue and understanding to achieve peace and eliminate all forms of fanaticism and discrimination.

Consolidating the principles of human brotherhood and the values of tolerance and peaceful coexistence is an unwavering approach in the wise policy of His Majesty the King, with the support of the esteemed government led by His Royal Highness Prince Salman bin Hamad Al Khalifa, the Crown Prince and Prime Minister. This approach is considered as a historical and cultural value emphasised by His Majesty the King in an article published in the American Washington Times newspaper on October 10, 2017. His Majesty affirmed that religious diversity is a blessing for the people of Bahrain who boast a long-standing heritage of coexistence as well as spiritual and cultural tolerance. The Bahraini people also set a model to emulate all over the world in religious and cultural tolerance and coexistence.

The constitution of the Kingdom of Bahrain underscores those noble values in article 18 which stipulates that “people are equal in human dignity, and citizens are equal before the law in public rights and duties. There shall be no discrimination among them on the basis of sex, origin, language, religion or creed.” The constitution also asserts in articles 22 and 23 freedom of conscience and the inviolability of worship, freedom to perform religious rites and hold religious parades and meetings in accordance with the customs observed in the country. In article 23, the constitution guarantees freedom of opinion provided that the fundamental beliefs of Islamic faith are not infringed, the unity of the people is not prejudiced and discord or sectarianism is not aroused.

The national legislations underline those values in concordance with the kingdom’s commitment to the principles of the Universal Declaration of Human Rights and its accession to more than 30 international human rights agreements. Bahrain has also worked on promoting its status as an oasis for religious freedom with the existence of over 1300 mosques alongside around 20 churches and Jewish synagogues, three Hindu temples and more than 90 non-government societies for the expatriate communities.

Thanks to the royal directives and the efforts of the Bahrain taskforce, led by His Highness the Crown Prince and Prime Minister, the Kingdom of Bahrain provided a global humanitarian model in facing the coronavirus pandemic and ensuring public health and safety by carrying out precautionary measures, providing free vaccinations to all citizens and residents, and providing a financial and economic package to support individuals and the private sector as well as humanitarian aid for affected people at the regional and international level, the Kingdom of Bahrain, under the leadership of His Majesty the King, has taken pioneering initiatives to spread the culture of tolerance and peace, most notably the organisation of international conferences on dialogue between religions, doctrines, civilisations and cultures. The United Nations also proclaimed the International Day of Conscience, in line with an initiative by the Kingdom of Bahrain. The kingdom has also launched many global awards for women and youth empowerment, backing sustainable development, Information and Communication Technology (ICT), education and service for humanity. Bahrain continues to play a civilisational role in promoting moderation and peace through the King Hamad Global Centre for Peaceful Coexistence, the King Hamad Center for Cyber Peace, the King Hamad Chair for Interfaith Dialogue and Peaceful Coexistence at the Italian University of Sapienza, and the “Declaration of the Kingdom of Bahrain” To promote religious freedoms.

The Kingdom has maintained its solid diplomatic principles within the framework of its respect for the principles of sovereignty, territorial integrity and political independence of states, non-interference in their internal affairs, and keenness to settle regional and international disputes by peaceful means and to support the unitary march of the Gulf Cooperation Council (GCC) in light of the outcomes of the “Summit of Sultan Qaboos and Shaikh Sabah” and Al-Ula Manifesto. The kingdom has also shown an unflinching support for the security and stability of Arab states, their unity and territorial sovereignty and the efforts to bring about a just and comprehensive peace in the Middle East by signing the “Abraham Accords Declaration” to promote religious coexistence. It has also been keen on strengthening its strategic partnership with 16 UN agencies under the framework agreement (2018-2022).

The Kingdom of Bahrain welcomed all international initiatives aimed at boosting interfaith and intercultural dialogue, including the Document on Human Fraternity for World Peace and Living Together, which was signed by the Al-Azhar Grand Imam Dr. Shaikh Ahmed Al-Tayeb and His Holiness Pope Francis of the Roman Catholic Church in Abu Dhabi on February, 4th,. 2019, a day that was proclaimed an annual celebration of the International Day of Human Brotherhood.

Bahrain has accorded a great importance to the role of the national media in promoting tolerance and renouncing hatred and fanaticism. As a matter of fact, the Ministry of Information launched its “Say Good” awareness campaign for the years 2016 and 2020. The ministry has also worked on consolidating commitment to the ethics of freedom of opinion, according to the law and the press Code of Honor, the Code of Honor for visual and audio media, the media behaviour guide and the national plan to promote national belonging and entrench the values of citizenship. The pioneering initiative regarding the amendment of the Arab Media Charter of Honor and the inclusion of media education in school curricula was also approved by the Arab League.