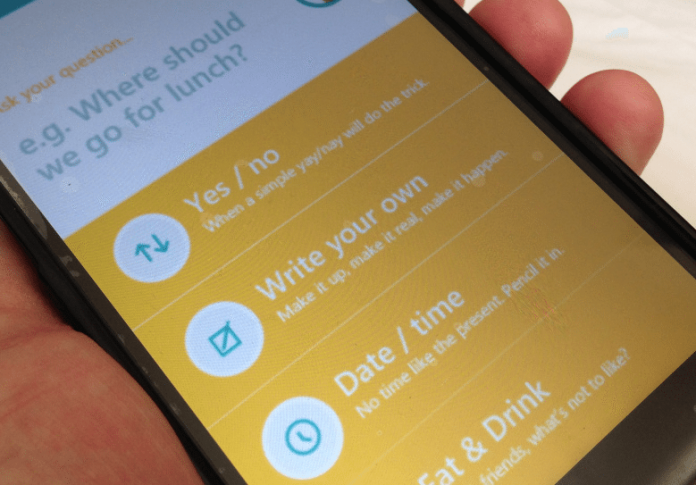 Microsoft is continuing its recent trend of ignoring its own Windows Phone mobile operating system with the launch of a new mobile app designed to help you create impromptu polls around events.

Available for Android and iOS in the U.S. only, Tossup lets you ask quick questions such as where to have lunch, for example, or where to meet. It can be used to garner opinions on just about anything. And Tossup is the latest in a long line of apps to emerge from the vaults of Microsoft Garage, the computing giant’s innovation lab.

Launched in August of last year, Snipp3t is an iOS-only app that gathers celebrity news from across the Web in a single place. Then there’s the Next Lock Screen app for Android which gives you access to key information directly from your lock screen. Picturesque is another lock screen app designed with Microsoft’s Bing search engine in mind. Journeys & Notes is a social travel app that seeks to connect a community of users who have traveled on similar routes.

Gulf Air, the national carrier of the Kingdom of Bahrain, has appointed Mr. Abdulrauf Meer Abdulrahim as Senior Manager Cabin Crew to manage one...
Read more
Inside Bahrain

Gulf Air, the national carrier of the Kingdom of Bahrain, has appointed Sh. Ali bin Mohammed Al Khalifa as Director Strategy and Planning to...
Entrepreneurial Journey

I never thought of advertising my business when I was a small shopkeeper. The word-of-mouth publicity among customers was sufficient for me in those...
Inside Bahrain

Arab Ministers of Social Affairs have praised the procedures taken by the Kingdom of Bahrain to handle the repercussions of coronavirus (COVID-19) pandemic in...
© GO ALIVE MEDIA
MORE STORIES