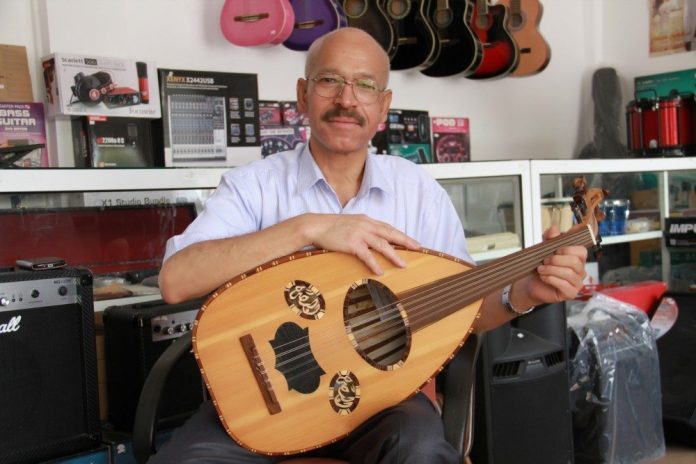 Our kingdom is rich with the different styles of music inspired by our heritage and developed by various artists. One such artist who has successfully taken the sweetness and simplicity of Bahrain’s music to another level is Mr. Salman Zaiman. A prominent music composer and founder of one of the oldest bands in Bahrain; ‘Ajrass’, Mr Zaiman now enjoys a retired life with his ‘Ajrass Music and Art Center’ on Old Palace Road in Manama.

An expert in everything related to pianos, this music maestro has kept himself away from the limelight since long, immersed in the world of music until the BTW team knock at the doors of his center. Welcoming us into his enclave of music and musical instruments, Mr. Zaiman takes us along on his journey down memory lane.

“I started off pretty young with percussion instruments. In 1969 I got my first instrument when I was in secondary school – a guitar. Those were times when we could hardly find an expert who could help us with playing them and there was no internet,” he says, laughing. “I slowly started finding tune in one string among the six. Then I developed a formula myself that helped me tune the guitar and was also able to find some harmony between them. It was after so many years that I found out that the tuning I did for my guitar was very similar to the actual international standard,” he says with a proud smile.

“I used to be a shy person and only let my talent show in front of my family. It was during my university days in Iraq during 1974 that I came out of my cocoon and actually started singing in public. All thanks to the encouragement of the students and the opportunities I received in there,” Mr Zaiman says, speaking of his transformation to a  public performer. “In 1977 I came back to Bahrain and joined the band ‘The Gulf Stars’. I produced my first album with them in 1979. That became my first break which made me known in Bahrain and in other GCC countries.”

Mr Zaiman later co-founded the band Ajrass, with his friends and siblings, taking traditional Arabic music to a new level. The band, during its period, had several successful performances delivered on numerous stages around the Gulf. Ajrass, which when translated to English means bells, was later used as the name of the art center that he began and is today regarded as one of the best piano tuning and maintenance centers in Bahrain. “It was with Ajrass, the band, that I have produced several music albums. These days we make single releases which we make available free over the internet; like through youtube, for the lovers of music,” says Mr. Zaiman. Sadly, the fact that several music producers have eventually stopped producing good albums with the advent of the internet era can’t be denied. With free copies made available online, who would actually think about buying an album?

Commenting on the beginning of Arabic music, he says, “Egypt has been the cradle of all developments in Art. Look at their music and film industries. No other nation in the Gulf has as strong a foot hold in them as the Egyptians have.” Emphasising on the traditional importance of music in the Egyptian community, he continues, “Did you know that there existed a tradition in Egypt which had the groom bringing a piano for the bride during marriage? The tunes that were created as early as the ‘60s and ‘70s are still a favourite among music lovers. They never grow old. Egypt is the only Middle Eastern nation which has two of the oldest music schools still in function. Just think about that!”

Mr. Zaiman is also all praises for the development of music in Kuwait. “I always love listening to the Kuwait radio frequency as they have some very unique compositions, which are a perfect combination of different music types. I especially love the compositions of Awad Dokhi.”

Speaking of the birth of the music composer in him, Mr Zaiman says, “A composer, as a creator, always has to create something new. I began as a composer when I gained my self-confidence while studying in Iraq. One day I found an interesting poem in a newspaper there. I started composing music for those verses while travelling between my place and the university. It was loved by everyone and I picked up from there.”

This experienced music aficionado believes that to be a composer, one needs to listen to a lot of music and then draw inspiration from within. “Sometime during the composing you will be going through a lot of emotions. Creating music for a happy mood is entirely different from how you will be working out a sad tune,” he says on the process involved in creating music. “When I wanted to compose music, I would go to a room and take my guitar and recorder and start living the music. It is about copying those emotions as a human into the music and it requires all the attention you can give.”

Having worked for 20 years at the International School in Bahrain as music instructor, Mr. Zaiman has been composer for several music concerts that were successfully presented at the Bahrain National Museum and The Concert Hall. He is also one of the most preferred composers for individual anthems for schools in Bahrain.

Mr Zaiman has the following words of inspiration for upcoming musicians of Bahrain, “Never stop listening to music. It will help you build your creativity. Also keep yourselves open to music of different cultures. Try creating something new, integrating different instruments even… probably a fusion. And finally create music that would touch the souls of your listeners.”