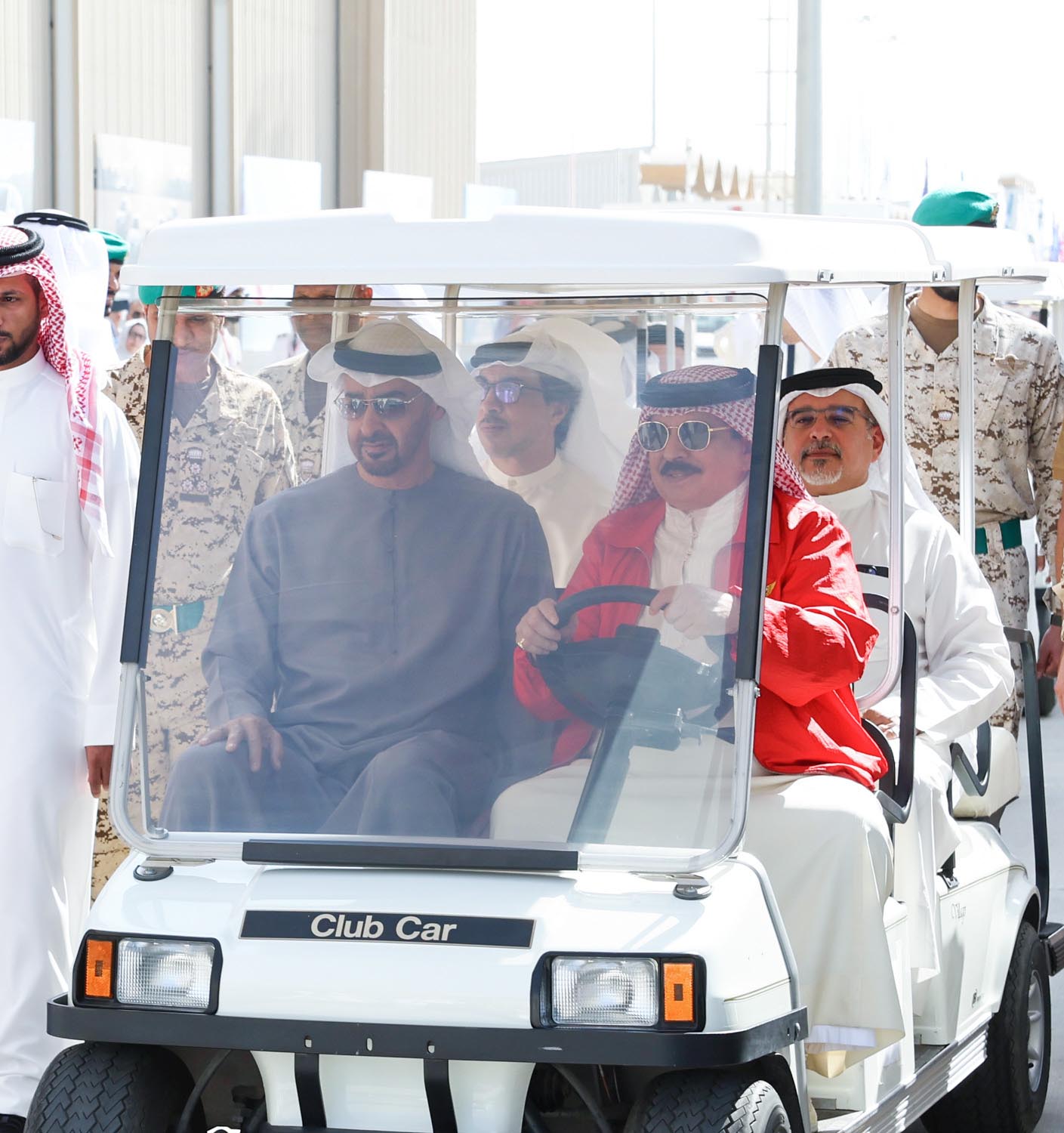 His Majesty King Hamad bin Isa Al Khalifa and President of the United Arab Emirates, His Highness Shaikh Mohammed bin Zayed Al-Nahyan, visited, in the presence of His Royal Highness Prince Salman bin Hamad Al Khalifa, the Crown Prince and Prime Minister, the sixth edition of the Bahrain International Airshow (BIAS 2022), which kicked off at the Al-Sakhir Air Base yesterday.

At the outset of the visit, HM the King, President HH Shaikh Mohamed bin Zayed and HRH the Crown Prince and Prime Minister visited the UAE pavilion, where they were briefed on the latest achievements of the Emirati national companies and institutions that display a set of developed projects in the aviation field.

They were also briefed on the pavilions of the other participating countries, and exchanged talks with heads and representatives of companies and exhibitors about the developments in the aircraft industry of various types and the latest innovations in civil and military aviation technologies. They were also informed about the most prominent modernisation and development plans and programmes currently conducted by international companies in the aviation sector.

About 100 aircraft of various commercial and military types participated in the air shows, including military aircraft from the Royal Bahraini Air Force (RBAF), Gulf Air, the US Naval Air Force, the Royal Saudi Air Force (Saudi Hawks), and the UAE Air Force (“Fursan Al Emarat” (The Knights)), the British Global Stars team, the RAF Red Arrows team and the Pakistan Air Force for the first time, which presented efficient and distinguished performances that earned the audience’s admiration.

HM King Hamad welcomed the country’s guests, senior officials and participants from various civil and military airlines, exhibitors and those interested in aviation sciences, wishing them a fruitful participation in BIAS 2022, which represents a vital and important global platform for the aviation sector to learn about modern technologies in this field, reach deals and exchange ideas and experiences.

HM the King commended the fruitful efforts made in the preparation and organisation of BIAS 2022 to ensure that the prestigious event maintains its distinguished level, becoming an important airshow on the map of international aviation exhibitions.

HM King Hamad paid special tribute to His Highness Shaikh Abdulla bin Hamad Al Khalifa, HM the King’s Personal Representative and Chairman of the BIAS Supreme Organising Committee, as well as to the members of the Committee for their tireless work, valuing highly, at the same time, the great efforts made by the Bahrain Defence Force, the Royal Bahraini Air Force and all concerned parties, in addition to the competencies who contributed to the success of this global event hosted by the Kingdom.

HM the King expressed his admiration for the air shows that reflected the ability and efficiency of the participating pilots, praising the distinguished organisation of the airshow, and wide the participation of brotherly and friendly countries and major international aviation and space companies.

HM King Hamad expressed pride in the wide-ranging achievements attained by the Kingdom thanks to the efforts of its citizens, who have proven their worth in all fields, noting that competence has contributed to strengthening the national economy and supporting the comprehensive development process.

UAE President praised the distinguished level of the organisation of BIAS 2022, wishing the kingdom continued progress and prosperity.

HH Shaikh Mohammed bin Zayed asserted that Bahrain continues to consolidate its position as a global destination by hosting these major international events.