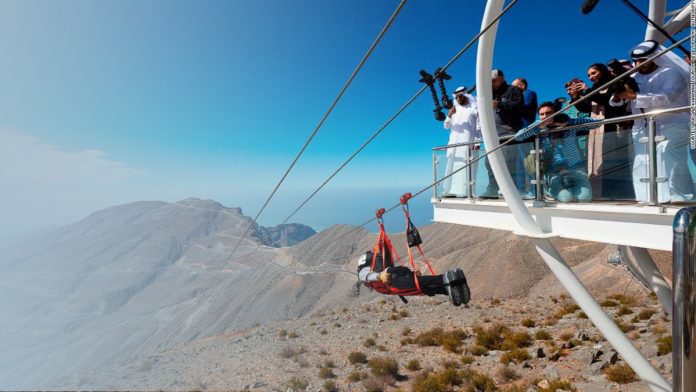 The world’s longest zipline, measuring 2.83km – equivalent to over 28 soccer fields, and spanning the chasm of Jebel Jais, the UAE’s largest mountain peak at over 1,680 metres above sea level, was opened to the public on February 1, 2018. “The Ras Al Khaimah zipline is being operated by Toroverde Ras Al Khaimah, the world’s most experienced zipline managers.”

“We anticipate the attraction accommodating a rider every five minutes on the two zip lines, equating to approximately 200 people per day, and around 100,000 per year,” explained Jorge Jorge, CEO of Toro Verde RAK.

“We also believe given its location in Jebel Jais, which is traditionally 10 degrees cooler than average UAE temperatures, we can operate during the summer months,” added Jorge.

The Rotary Club of Salmaniya held it’s 8th virtual meeting on May 20th 2020 on zoom. In the spirit of the Month of May...
Read more
Sports This Week

The fastest-growing MMA organization in the world is set to take the world of boxing by storm. BRAVE Combat Federation has announced that, in...
Entrepreneurial Journey

The Volvo S60 has been named “Best Midsize Executive Sedan” at the 2020 Middle East Car of the Year Awards. The prestigious award comes...
Management Principles