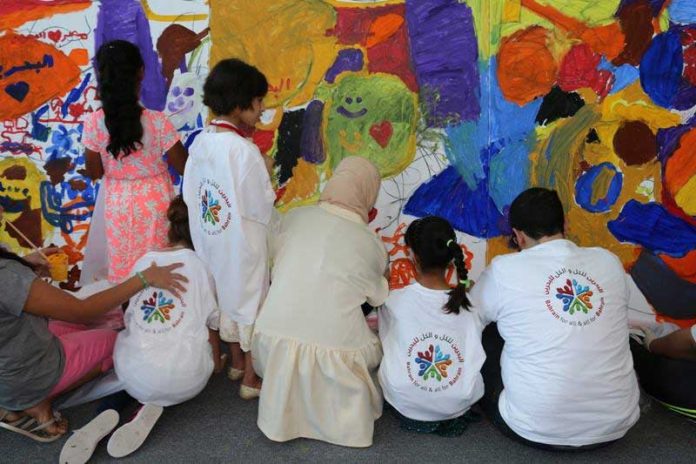 Under the patronage of H.R.H. Prince Khalifa bin Salman bin Hamad Al Khalifa, the Prime Minister of Bahrain, Bahrain for all & all for Bahrain in association with Ministry of Interior organize Universal Children’s Day on November 18th 2017, at Safra Girls School from 10am to 4 pm for the children in the Kingdom.

United Nations Universal Children’s Day was established in 1954 and is celebrated on November 20th each year to improve awareness of their rights among children worldwide, and to improve children’s welfare.  This day also promotes international togetherness, since November 20th it is on this date in 1959 that UN General Assembly adopted the Declaration of the Rights of the Child and the Convention on the Rights of the Child.

Since 1990, Universal Children’s Day marks the anniversary of the UN General Assembly’s adoption of both the Declarations and the convention on children’s rights. Parents, teachers, Medical Practitioners, government leaders and civil society activists, religious and community elders, corporate moguls and media professionals, young people and children themselves can play an important part in making Universal Children’s Day relevant for their societies, communities and nations.

H.R.H. Prince Khalifa bin Salman Al Khalifa, has always promoted and cared for the welfare of the children in Bahrain who will be the future face of the Kingdom.

Universal Children’s Day on November 18th, will see some unique activities for children, by children, to help save children’s lives, fight for their rights and help them fulfil their potential all over the world. This will be a fun day, with a serious message, when kids ‘take over’ high-visibility roles in media, politics, business, sport and entertainment to shed a light on the most pressing challenges faced by their generation.

‘Kids Take Over’ will be an activity game where participating children will be asked to stand or sit in a circle, and toss a blue ball (the symbol of World Children’s Day), to a friend. Whoever catches it has to say what changes they would make for every child if they took over the world. For example: “I would give every child enough to eat” or “I would give every child a home.” This will make them realize  what other children need or what they don’t have now. The game will continue until everyone has a turn.

“Recycling Workstation” will be an interactive activity. Children will be informed about the importance of saving the environment and recycling items.

“Cake Take Over” will give an opportunity for the children to ask the top bakers in the Kingdom to make their favorite treats and hold a cake sale. This will enable the children to understand the real life scenario behind the Sweet World.

Did you know that the right to play is also a right that is recognized under the Convention of the Rights of the Child? The sports activities organized during the event will ensure that the children will get ample opportunities to dwell in their favorite games.

There is a world beyond academics for the children. “Takeover Talent Time” presents opportunities for children to present their skills in the arenas of dance, music and other art forms. This is in coordination with concept of putting the children on the world stage.

Universal Children’s Day offers each of us an inspirational entry-point to advocate, promote and celebrate children’s rights, translating into dialogues and actions that will build a better world for Children.

BRAVE Combat Federation’s vision of globalizing the sport started within the Arab world, which was often overseen by many other organizations, and to provide...
iGA