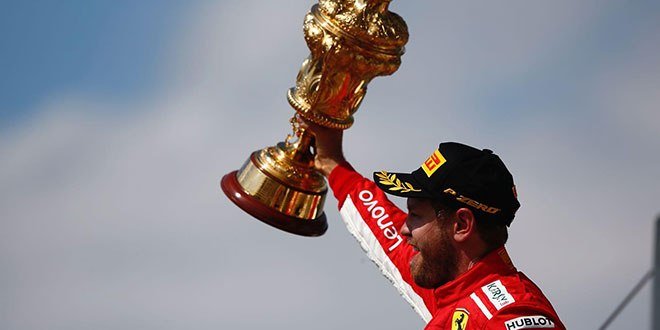 Scuderia Ferrari’s Sebastian Vettel has won an amazing ROLEX 2018 BRITISH GRAND PRIX, ahead of Lewis Hamilton and Kimi Raikkonen in the other Ferrari, and the German is now leading the world championship by eight points. Hamilton came right through the field, after an accident in the first lap, to limit the damage inflicted by the Scuderia as his team mate Bottas took 4th place and a few more valuable points for the Constructors’ Championship.

And what a race it was! The start set the stage for the next 52 laps as Vettel had a blistering getaway and jumped the wheel-spinning World Champion Hamilton, who then lost another place to team mate Bottas, and was then hit by a late-braking Raikkonen. The Finnish Ferrari driver was then given a 10s penalty for banging into Hamilton going into Turn 3, causing the English driver to spin off and join the chasing pack right at the back.

How much this win meant to Ferrari was demonstrated by the immediate radio exchanges, in Italian, after the chequered flag as the winning driver told his pit wall that it was all about winning in ‘their home’ and ‘bringing the British flag to Maranello’. Fighting passion, for sure.

After one lap Vettel was already 2s ahead of Bottas and by lap 3 the gap was more than 3s. Hamilton was then in 15th place, but he was already carving his way through the rest of the field to the delight of the vast Silverstone crowd – 340,000 over the race weekend. By lap 13 the Englishman had overtaken the ‘best of the rest’ and was now 13 seconds behind Ricciardo’s Red Bull and the other leading cars, all of which were going to be a much tougher proposition to pass.

Raikkonen came in on lap 14 for his penalty and a tyre change, rejoining in 10th place, while race-leader Vettel was now 26 seconds ahead of Hamilton, who was now 5th. The German Ferrari driver was controlling the race from the front, lapping 5s ahead of the chasing Mercedes and, on lap 19th, Hamilton was in 3rd place, benefiting from his rivals pitting for tyres. But he was still a hefty 21s behind the race leader.

Vettel came in on lap 21, and rejoined behind Bottas, who in turn also came in for a tyre change, both drivers switching from Soft to Medium compounds, so that one lap later it was Hamilton who was running second, 3s behind, though of course he had not stopped yet.

By lap 30 the race seemed settled into a steady pattern, as Vettel lead Bottas by 2.3s, followed by Max Verstappen and Daniel Ricciardo in their Red Bulls, and Hamilton in 4th place, 22s behind his German championship rival.

The Safety Car finally made its appearance, as Marcus Ericsson had a big crash at Abbey, on lap 32, thankfully with no physical consequences for the Swedish driver. Both Saubers were now out as Charles Leclerc had to retire earlier because of a wheel nut issue in the pit-stop.

This was the key moment of the race, when the two teams fighting for podium places opted for different strategies. Mercedes chose not to pit, which allowed them to grab the race lead with Bottas, but the flip side was that both him and his team mate had to go to the end on the same set of Medium tyres. Ferrari instead elected to switch back to the softer compound, which gave them a performance advantage.

With 15 laps to go, the Safety Car came in and the race was back on. Bottas was in the lead, followed by Vettel, Hamilton, Verstappen, Raikkonen and Ricciardo. What developed then was a sprint race of sorts, a stunning show for the fans at the track and all over the world. It started when Vettel tried to pass Bottas, who defended brilliantly, while Raikkonen and Verstappen swapped positions twice over a few metres. But this wheel-to-wheel racing did not last long enough, one lap only, as Romain Grosjean and Carlos Sainz tangled and flew into the barriers and out of the race. With ten laps to go, out came the Safety Car again, and Bottas led once more, ahead of Vettel and Hamilton.

Once the Safety Car went back in, the finishing laps were even more brilliantly exciting as Bottas repeatedly fended off Vettel’s attacks, while Raikkonen who has passed Verstappen, was threatening Hamilton who was in 3rd place. Finally, Vettel took the lead and drove to victory, behind him Raikkonen passed Bottas to take a strong third place.

With this win, his 51st in Formula 1, Vettel joins Alain Prost in 3rd place of the all-time winners table, behind Hamilton (65) and Michael Schumacher (91). Vettel now leads the driver’s standings with 171 points and Hamilton is second on 163 while Raikkonen follows with 116. Ferrari also lead in the Constructor’s Championship with 287 points, 20 clear of Mercedes.

In the FIA Formula 2 Championship Sprint Race, Maximilian Günther produced a metronomic performance, keeping his cool through a frenetic race to clinch his first F2 victory. The BWT Arden driver was joined on the podium by George Russell and Lando Norris, who both produced fantastically- executed races to carve their way through the pack. Thanks to his brace of second-place finishes, Russell is ahead of Norris by 37 points, leading the way with 170 points. Norris is ahead of third-placed Albon by 18 points, as ART Grand Prix is now in joint top spot in the teams’ championship, tied on 219 points with Carlin. Charouz Racing System remain in the top three with 159 points.

Pedro Piquet swept to his maiden victory in the GP3 Series, taking the lead at turn 1, followed by a flawless performance in Race, 2 to stand at the top of the podium. Polesitter Giuliano Alesi grabbed 2nd place, 1.4s down on the Brazilian driver, as Ryan Tveter crossed the line 3rd to complete an all-Trident podium. Anthoine Hubert leaves Silverstone with 100 points in the standings, with Ilott following behind on 94. Pulcini reclaims third overall with 73 points – two clear of Mazepin. ART Grand Prix have 300 points in the teams’ standings, 104 points clear of second-placed Trident. Campos are third with 77 points.

Both the FIA Formula 2 Championship and GP3 Series will come back in Budapest in the 27-29 July weekend for another exciting round of races.