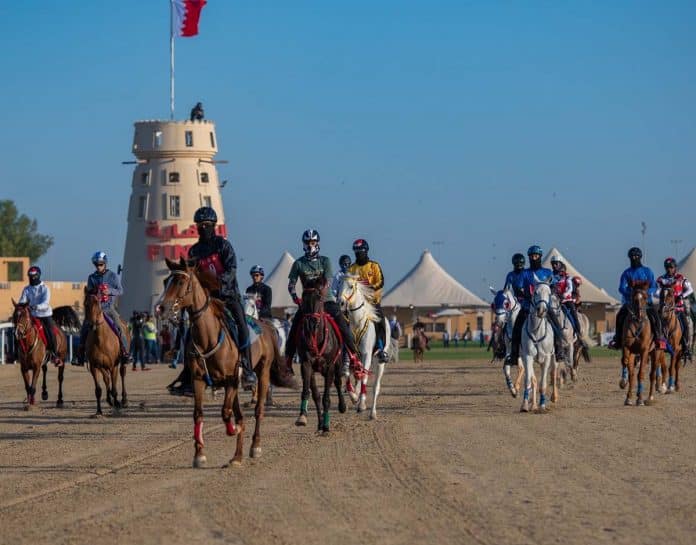 Under the patronage of HM King Hamad bin Isa Al Khalifa, the King of the Kingdom of Bahrain and in the presence of HH Shaikh Nasser bin Hamad Al Khalifa, Representative of His Majesty the King for Charity Works and Youth Affairs, National Security Advisor and President of the Supreme Council for Youth and Sports as well as HH Shaikh Faisal bin Rashid Al Khalifa, Vice President of the Supreme Council for Environment, HH Shaikh Isa bin Abdullah Al Khalifa, President of the Bahrain Royal Equestrian and Endurance Federation (BREEF) crowned Joaquin Stirling of Al Ain Studs in UAE as the champion of HM the King’s Endurance Cup for GCC Studs. It took place as part of HM the King’s Festival. GFH group sponsor, the event has been held at the Endurance International Village. Meanwhile, HH Shaikh Isa also crowned Fahad Al Khateri of Al Riffa Studs. After coming second and third-placed Khalifa Jamal of Al Mughairat Studs. Stirling topped the podium. Posting a time of four hours, 32 minutes and two seconds, almost 18 seconds ahead of Al Khateri. Jamal finished in five hours, 19 minutes and 20 seconds.

On this occasion, HH Shaikh Nasser expressed his delight at the performances showcased during the event.

Explaining that the race witnessed great excitement from the very beginning. “The King’s Endurance Cup has become of great importance to all the GCC studs due to the enormous competition it features. Joaquin’s victory was well-deserved”. HH Shaikh Nasser points out. Adding: “The performances displayed during the event confirms the prominent position of the endurance sport in the Arab world. HM the King’s Festival has always been exciting. It reflects a bright image of this sport in Bahrain.” Moreover, HH Shaikh Nasser congratulated the winners of the top places in the race.

From his side, HH Shaikh Isa bin Abdullah Al Khalifa praised the unlimited support exerted to the endurance sport from HH Shaikh Nasser. Stating that his follow-up to all the stages of the event underlines HH’s concern and keenness to continue supporting this sport. He expressed his utmost happiness at the success of the event.

After winning the race, Stirling was very happy to emerge as the victor. Amid tough competition witnessed throughout the race.