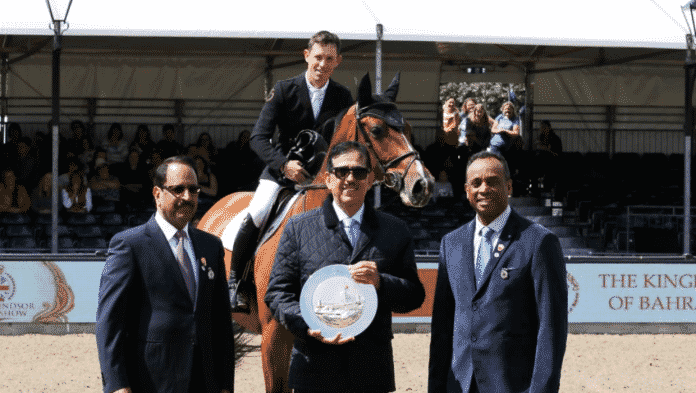 Winning the event was Irish Sean Brian, who completed the event in 61.75, followed by British Guy Williams and British Scott Brash in second and third places respectively.
Also featuring in the event was Bahrain’s Khalid Hilal Al Khateri who finished the event in 72.82 seconds with four faults.

Commenting on the event, Dr Khalid said that Manama Rose Show Stakes was a great opportunity to highlight the Kingdom of Bahrain in this big sports event and shed light on its modern achievements in the bright era of HM King Hamad bin Isa Al Khalifa, the King of the Kingdom of Bahrain in various fields, hailing the care and interest of HH Shaikh Nasser bin Hamad Al Khalifa, Representative of His Majesty the King for Charity Works and Youth Affairs and President of the Supreme Council for Youth and Sports and his follow up to make all the Bahrain-organised events in the festival a great success. He noted the great performances displayed by the Bahrainis during the event.

From his side, Al Alawi pointed out that the contest came very strong, while Al Salehi explained that the Festival was a unique chance to continue promoting Bahrain at the international level, praising the strong field participants who took part in the endurance race which was established by the Kingdom and marked its 7th anniversary this year.

The right channels of communication between authorities and the public can greatly improve speed and excellence in delivery of services. A new channel of...
Read more
PR This Week

All the Rotary Clubs of Bahrain organised a joint handover event on 29th June 2020 on Zoom. A handover is when the current President...
Sports This Week