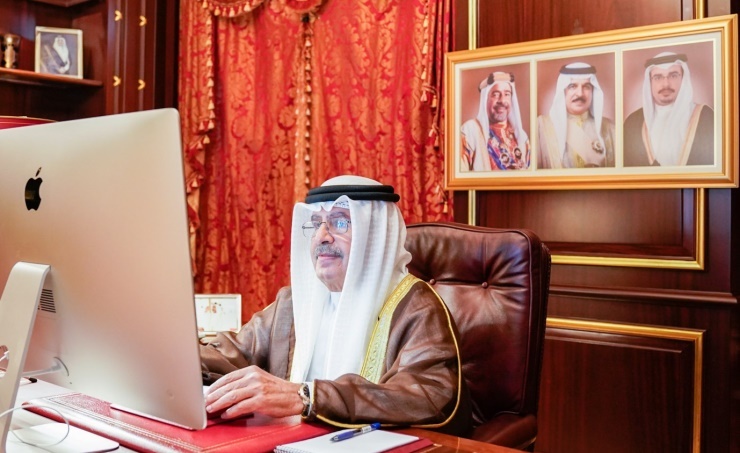 During the celebration, winners of the 5th edition of the award were honoured in four categories: the best opinion column, the best investigative report, the best interview and the best photo.

The Deputy Prime Minister, the Deputy patron of the celebration, delivered a speech in which he expressed thanks and appreciation to HRH the Crown Prince and Prime Minister for patronizing the award and supporting the national press which plays a constructive role in boosting the comprehensive development achievements brought about under the leadership of His Majesty King Hamad bin Isa Al Khalifa.

The Deputy Prime Minister conveyed to the attendees the greetings of HRH Prince Salman bin Hamad Al Khalifa, the Crown Prince and Prime Minister, and his appreciation of the journalists’ remarkable contribution to the national efforts he is leading in various areas. He recalled the role of late HRH Prince Khalifa bin Salman Al Khalifa in patronizing the previous edition of the award and supporting free and responsible journalism.

The Deputy Prime Minister underscored the role of the national press in supporting the government action plan and promoting sustainable development through conscious commitment to national unity and promotion of the Arab cultural identity, tolerance and moderation.

Addressing the attendees of the virtual celebration, Information Minister Ali bin Mohammed Al Romaihi extended sincere thanks and appreciation to HRH the Crown Prince and Prime Minister for patronizing the award and for his unflinching support to responsible freedom of expression and the enlightened national press. He also thanked the Deputy Prime Minister for attending the celebration.

The Information Minister paid tribute to the press and media community for its commitment to expressing credibly, honestly and transparently the conscience of the nation, its unity and Arab Cultural identity. He also praised the role of the national media and journalism in highlighting the kingdom’s achievements under the comprehensive development march led by HM the King.

The Information Minister praised the efforts of the jury in evaluating more than 300 journalistic works and choosing the best of them in an objective, impartial and transparent way. He stressed that Bahrain’s press, thanks to the unlimited support of HM the King, is going ahead with its pivotal role as an active partner in maintaining national security and stability and boosting achievements. He also affirmed the key role of the national press in confronting the suspicious and hostile campaigns targeting the kingdom’s security, stability and identity. He noted the role of the press and media in consolidating Bahrain’s standing as a model of tolerance, creativity and responsible media freedom.