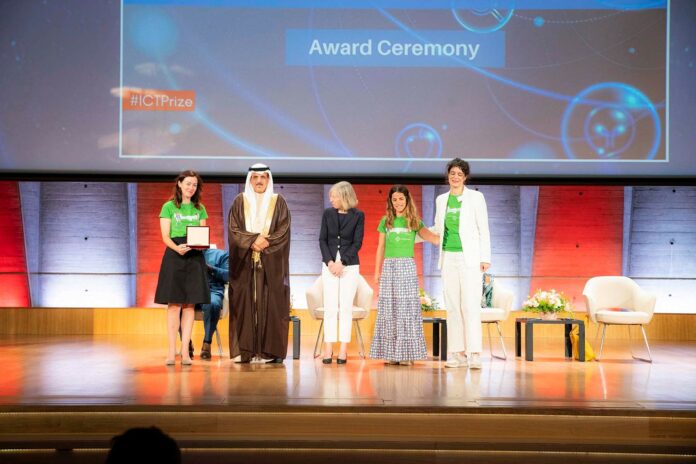 Under the patronage of His Majesty King Hamad bin Isa Al Khalifa, the United Nations Educational, Scientific and Cultural Organisation (UNESCO) held, in cooperation with the Education Ministry in Bahrain, the award-distribution ceremony of the UNESCO-King Hamad bin Isa Al-Khalifa Prize for the Use of Information and Communication Technologies (ICTs) in Education at it premises here.

HM the King deputised Education Minister, Dr. Majid bin Ali Al-Nuaimi, to attend the ceremony and present the awards to the 11th and 12th editions’’ laureates, who have not been honoured due to the spread of the COVID-19 pandemic, in addition to the winners of the current edition.

The ceremony was attended by Ms. UNESCO Assistant Director-General for Education, Stefania Giannini, President of the General Conference of UNESCO, Ambassador Santiago Irazabal Mourão, senior UNESCO officials,  ambassadors, media professionals, researchers and specialists in the fields of information and communication technology, in addition to Bahraini students studying at French universities.

Addressing the ceremony, UNESCO Assistant Director-General for Education praised this award, noting that it recognises initiatives that promote the use of information and communication technologies in the field of education. She affirmed that the prestigious prize has become an educational reference that keeps pace with modern developments, as it has achieved great success and become very popular all over the world.

Then, the Education Minister delivered a speech in which he conveyed greetings and congratulations from HM King Hamad and His Royal Highness Prince Salman bin Hamad Al Khalifa, the Crown Prince and Prime Minister, to the jury and officials of the UNESCO-King Hamad ICT Prize, as well as the winners.

He affirmed the kingdom’s support for UNESCO’s programmes and studies, commending the efforts exerted by UNESCO Director-General in leading the international organization under various circumstances, citing UNESCO’s positive role in backing efforts to ensure the continuity of education during the spread of the pandemic.

He pointed out that the UNESCO-King Hamad ICT Prize has become one of the leading prizes in honoring pioneering initiatives in the field of the use ICT in education.

Dr. Al-Nuaimi highlighted the kingdom’s efforts to ensure the continuity of education during the pandemic, citing its success in providing education through the educational portal (eduNet), televised lessons and 14 YouTube channels, including one channels for students with special needs and another for those of technical and vocational education.

After that, a film highlighting the efforts of the kingdom to ensure the continuity of the learning process during the pandemic was screened.

Members of the Student Orchestra in Bahrain staged a musical performance including local and international musical pieces.

After that, International Jury member, Dr. Inge Molenaar and President, Ibrahima Guimba-Saidou, delivered statements in which they praised the prize, and highlighted its importance for the world.

Then, Education Minister and UNESCO Assistant Director-General for Education honoured the laureates:

The awards of the 2019 edition, themed “The use of Artificial Intelligence to innovate education, teaching and learning” were presented to:

The “Letrus Literacy Program” is a Brazilian education technology start-up that has developed a programme for automated feedback on students’ writing. It aims to reduce functional illiteracy in the Portuguese language by improving practice opportunities for secondary school students and teachers.

Change Dyslexia is a Spanish social company that has developed a screening tool to detect dyslexia in Spanish speakers all over the world in 15 minutes. It also provides game-based exercises for learners with dyslexia to overcome writing and reading difficulties.

The awards of the 2020 edition, themed “The use of Artificial Intelligence to enhance the continuity and quality of learning.” were presented to:

– One College Student Per Village, Open University of China:

The “One College Student Per Village” programme implemented by the Open University of China uses AI to provide learners from rural and remote areas with quality learning opportunities.

The collaborative education platform “ViLLE” developed by the Centre for Learning Analytics (University of Turku) offers a personalized set of exercises based on students’ performance and provides teachers with detailed reports on their students’ progress.

The awards of the 2021 edition, themed “The use of technology to enable inclusive crisis-resilient learning systems” were presented to:

“Initiatives for Inclusive and Accessible Education during COVID-19” implemented by the Central Institute of Educational Technology (CIET), National Council for Educational Research and Training from India.

“Digital Educational Programme” implemented by Ubongo from the United Republic of Tanzania.

Then each laureate gave a brief presentation of their initiatives.

The Minister presented a souvenir gift to the UNESCO Director-General.