A World Heritage Site is a place of outstanding cultural or natural history importance that is a common heritage of humanity. There are 74 World Heritage Sites in the Arab world out of which two are located in Bahrain – Qal’at al Bahrain (Bahrain Fort), the Ancient Harbour, the Capital of Dilmun, and the ‘Pearl Trail’ in Muharraq. During a recent seminar on ‘The Role of Museums in Society’, various international museum and historical monument experts declared that Bahrain’s two sites are in excellent order.

But elsewhere, fourteen World Heritage Sites in the Arab world are regarded as ‘endangered’, i.e. they will be irreparably damaged if steps are not taken to provide better protection for them. Seven of these ‘endangered’ sites are in Syria, including the ancient cities of Damascus, Bosra and Aleppo, the site of Palmyra and various ancient villages in the north. The historic town of Zabid, in Yemen, is another ‘endangered’ site. 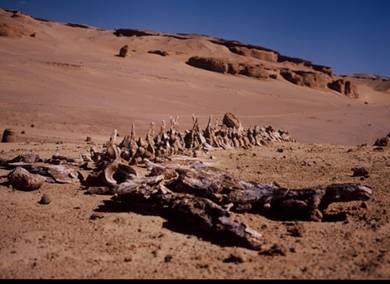 One of the most interesting World Heritage Sites in the Arab world is Wadi Al-Hitan, the famous ‘Whale Valley’ in the western desert of Egypt. This site contains the skeletons of over 400 extinct whales, the fossils of many marine reptiles and animals without backbones and shark teeth over 40 million years old. The return to the sea of a major group of land animals, the mammals, is one of the most extraordinary episodes in the history of life. The fossils at Wadi Al Hatan, which are exposed at the surface and easy to see, tell the amazing story of the evolution of whales from land-living animals.

Other important World Heritage Sites in the Arab world include Tassili n’Ajjer in Algeria, one of the world’s best sites for prehistoric rock paintings, and ‘Moon Valley’ in the Wadi Rum Protected Area in southern Jordan. This site has iconic desert landscapes as well as petroglyphs (rock engravings) and archaeological remains that indicate that humans have been living there for over 12,000 years.

The Ichkeul National Park in Tunisia is an annual stop-over point and breeding site for over 300,000 migratory birds, including ducks, geese and coots. It is the last remaining major wetland ‘airport’ for birds migrating from northern Europe and Russia into Africa, as the chain of wetlands that previously stretched across North Africa has largely been destroyed by development.

Closer to Bahrain is the Socotra Archipelago World Heritage Site, off the coast of Yemen. This remarkable group of four islands has a very diverse fauna with extremely high levels of endemism, i.e. its animals are found nowhere else. 95% of Socotra’s land snails, 90% of its reptiles and 37% of its plants are unique! The sea around the islands is also inhabited by an astounding 253 species of reef-building corals and over 730 species of fishes.

We really do live in an extraordinary part of the world!