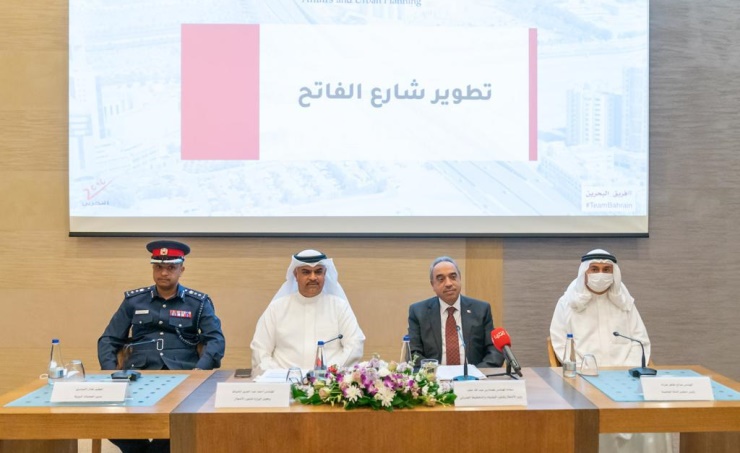 Present were Undersecretary for Works Affairs Ahmed Abdel Aziz Al-Khayyat, the Chairman of the Capital Municipality Council Saleh Tarada, the Director of Operations and Traffic Control Department at the General Traffic Department, Colonel Adel Al-Dosari, and a number of officials.

Speaking at the press conference, the minister commended the government’s support to infrastructure projects and the development of strategic roads network to reduce traffic congestions and boost national.

“Bahrain is working in accordance to Vision 2030 to design, implement and manage the roads network to provide safe, smooth, and effective traffic movement for all road users, supported an infrastructure that incorporates  latest standards and guidelines.

He stressed continued projects to upgrade main intersections, pointing out that the Al Fateh Highway Upgrade Project which was launched in 2018 is  on track as planned.

He said that many ground services that impeded the main works of expanding and upgrading Al Fateh highway, have been diverted, in addition to the construction of the main sewage water line extending from Juffair to Al Ghuraifah which has been recently completed.

The ministry has been working since April 2021 on the main works of the project which is expected to be completed in 2024.

The total cost of all stages of the project will amount to 40.5 million Bahraini Dinars, which also includes design and site supervision contract.

The ministry completed the construction of all the piles and piers of the U-turn flyover, and that the process of constructing the flyover is proceeding according to the program, which is scheduled for opening to traffic in the last quarter of this year 2022.

The construction of piles for the left-turn flyover for traffic heading towards to Prince Saud Al Faisal Highway has begun, in conjunction with the required traffic diversions to provide work space.

The left-turn flyover is set to be opened to traffic in the first quarter of the year 2023. Additionally, secant piling works are in progress in preparation for the underpass excavation and structural works.

Al Fateh Highway Upgrade Project ranges from the entrance to the Exhibitions Avenue in the north to Mina Salman interchange in the south.

It includes the development of Shaikh Daij junction,  al-fateh center junction, and Dulab junction, with the aim of providing seamless traffic movement in both directions.

The main works of the project include the expansion and upgrade of Al Fateh Highway to four lanes in each direction over more than 3 km, and the construction of an underpass with three lanes in both directions with a length of 595 meters at Gulf Hotel Junction to for traffic between north and south, in addition to signal-controlled junction at ground level.

The project also includes the construction of a one-way left-turn flyover with two lanes for people coming from Manama from the north on Al Fateh Highway towards Prince Saud Al Faisal Avenue.

The junction of Al Fateh Highway with Shaikh Daij Avenue will be removed to provide free traffic movement on ground level.

The project also includes the construction of a U-turn flyover with two lanes near the entrance to Al Fateh Corniche for northbound traffic to turn towards the south.

Al Fateh Highway is considered as the main artery carrying traffic for East Manama, and it is an integral part of the ring road in the capital, Manama, which, upon completion, aims to provide free flow traffic around the capital.

The main works of the project have been awarded to a joint venture between Nass Contracting Co. (Bahrain) and Huta Hegerfeld Saudi Ltd. (Saudi Arabia) by the Tender Board with a contract sum of BD 29,662,315, financed by Saudi Fund for Development (SFD).

The three-year instructure project which was given the go-ahead in April 2021 is under the supervision of Parsons Engineering Consultancy.

The minister then uveiled the virtual tour, which includes a 3D virtual model of Al Fateh Highway Upgrade Project and various multimedia which includes an overview of the project, its strategic dimensions and its impact on the national economy, traffic statistics, existing and upcoming traffic diversions, construction progress photos and completion percentage, and dedicated section for the latest news and coverage that will be updated regularly.

The tour portrays a modern and virtual style designed using highly interactive technology with the aim of public engagement, enhancing project communications, and closely informing the highway users on the latest developments of the project.

The exhibition can be visited electronically through the Ministry’s website www.works.gov.bh and the Ministry’s Instagram account @Bahrain_Works. An interactive platform is also available for the public in the Avenues Mall.