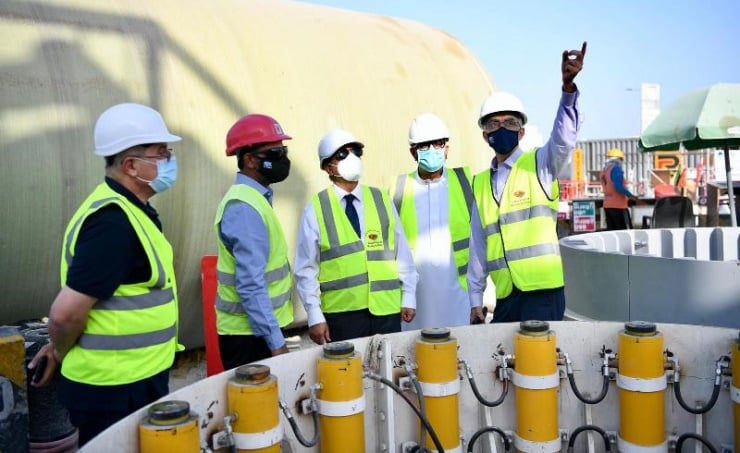 Works, Municipalities Affairs and Urban Planning Minister, Esam bin Abdulla Khalaf, has inspected Phase 4 of the Tubli Wastewater Plant Expansion project in order to be informed about its progress.

The minister said that the project is among the Works Ministry’s major strategic sanitation projects aimed at enhancing the performance of the Tubli Wastewater Plant and increasing the production of treated water used in irrigation and agricultural beautification.

During the visit, the minister stressed the need to adhere to the occupational health and safety requirements at work sites, by taking all preventive measures, and applying safety standards during the implementation period, under the supervision of the Ministry’s engineers, to ensure the safety of workers at the project, and add to the project’s milestone of achieving two million and a half hours without injuries.

He pointed out that another project is being implemented in parallel with the Tubli Tubli Wastewater Plant Expansion.

Funded by the Saudi Fund for Development, the project includes the construction of several buildings for laboratories, a workshop, the plant’s administration and the Sanitation Affairs Directorate.

The construction of the plant, costing BD78 million, is being jointly funded by Saudi Arabia and Kuwait, as part of the Gulf Development Programme.

The operation and maintenance of the old and new plant will be funded by the Government of Bahrain for 10 years.

The consortium of KEO International Consultants and p2mberlin are the Project and Construction Management Consultants.