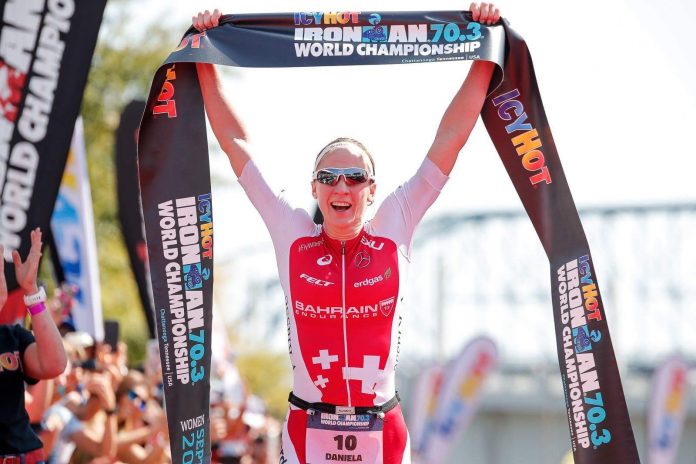 On Saturday, Ryf made history by becoming the first female to win an Ironman 70.3 world championship three times. The Swiss speedster in racing red had shaken off the injury that plagued her early season, and was in a class of her own throughout the race. After exiting the water in sixth place a minute back from the front, she took charge on Chattanooga’s hilly bike course. With a six-minute lead by the finish, her win was never in doubt.

“It’s very special. It was not an easy year and to come back like this, it means a lot and I’m very happy,” said Ryf. “It was one of those races you wish to have at a world championship. It was not all perfect, I actually lost my nutrition after 5K on the bike and I really struggled to get energy. I wasn’t sure I was going to make it to the finish line so I grabbed everything I could on the aid stations. I’m really happy I could show such a great performance.”

After struggling at last year’s world championship on the Sunshine Coast and clawing her way back during the race to finish fourth, Ryf felt motivated to train harder. “This year I really tried to take the good energy with me into the race. I feel very happy to take the win, but it was a hard race. I had to really give it my best and I knew that was needed to be able to win today.”

The Sunday men’s race was a closer one with Gomez exiting the water and getting off the bike second to Ben Kanute, with the rest of the field in a distant chase group. But the five-time ITU world champion’s run is his strength; Gomez put on the afterburners to take his second Ironman 70.3 world championship.

“It was a tough race and Ben did an amazing bike and I had to take my risks on the run,” said Gomez, who missed last year’s race due to injury. “That first lap I ran faster than I should normally, but I wanted to catch him and then I survived the last 3 or 4 kilometers. It was enough. I’m really proud and happy.”

The Spaniard took the lead in the race with only five miles to go, then surged ahead to gap the American by two minutes at the finish. “I just went for it from the beginning. I didn’t think too much, I just tried to find a hard pace that I felt I could keep for the whole race. When I eventually caught him, I didn’t have much left, but luckily it was enough to pass him and take the win.”

Both Ryf and Gomez are in the running to win the Nasser Bin Hamad Triple Crown series, which awards a bonus of one million dollars apiece to the athletes who win three races: Ironman 70.3 Dubai, the Ironman 70.3 World Championship, and the Ironman 70.3 Middle East Championship. With the two athletes having ticked off the first two titles this year, all eyes will be on their performance in Bahrain in December.

However, their focus will first have to be on the world championships ahead of them: Gomez will attempt to back up from this win at the World Triathlon Series final next week in Rotterdam, while Ryf makes the finishing touches on her build towards the Ironman World Championship next month in Kona.

After going undefeated over the distance since last year’s championship, defending Ironman 70.3 world champion Holly Lawrence pulled out of the race midway through the bike leg. “Not the day I’d hoped for. Not sure quite what happened and disappointed to have to DNF! Wiped from the start, had the worst swim in history and then the bike didn’t get any better,” said the British athlete. “It’s racing and sh*t happens and I’ve had my fair share of highs this year to balance it out! I’ll be back, no question about that.”

Other members of the Bahrain Endurance contingent finished strong. Brent McMahon placed 18th in the world, and the Canadian takes it as a positive sign for Kona. His Highness Shaikh Nasser Bin Hamad Al Khalifa and coach Mikel Calahorra also proudly represented Bahrain on the tough World Championship course.

Ben Hoffman’s second-place finish at Ironman 70.3 Santa Rosa rounds out the weekend report for the team. With the swim shortened to 750 meters due to fog, the American needed to push on the bike and run to gain position. The finish came down to a thrilling sprint on the beach reminiscent of last year’s, except he gained one spot higher on the podium. Hoffman quipped, “Can’t complain with a 2nd here in Santa Cruz, but 0 for 2 on beach sprint finishes in this town. Thanks for the support, on to Kona.”

The Ebrahim K. Kanoo company has hosted the first ever INJAZ Bahrain Virtual Job Shadow event in Bahrain showcasing the different aspects of the...
Read more
PR This Week

Sudan’s Acting Foreign Minister Omar Qamar Al Din Ismail has praised the support of His Majesty the King to Sudan in various circumstances and...
Wheels and Gears