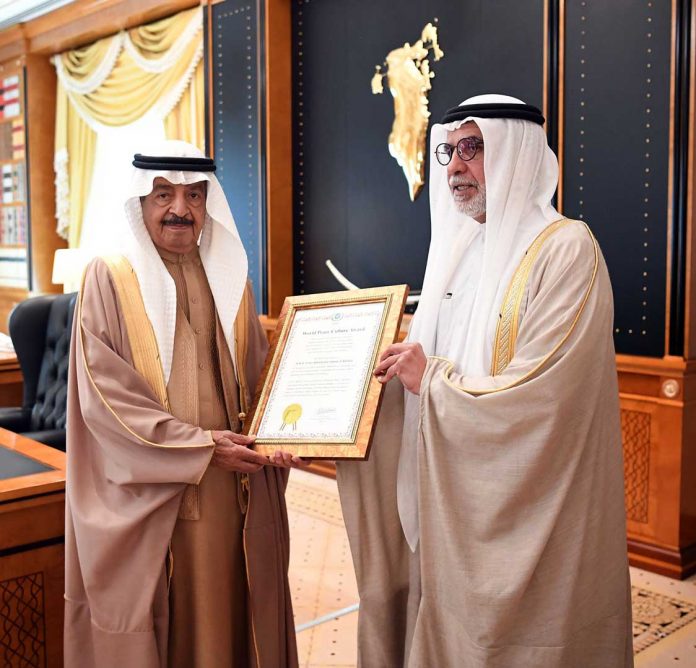 The World Peace Award Won by the Kingdom

The Federation of World Peace and Love (FOWPAL) conferred a shield on HRH the Premier in recognition of his landmark contribution to promoting the traditions of peace, tolerance and diversity. The shield was presented to
His Excellency Shaikh Hussam bin Essa Al-Khalifa on behalf of H.R.H the Premier, during an annual FOWPAL ceremony held in New York, on the sidelines of the United Nations (UN) General Assembly meetings.

This is a moment of glory for the Kingdom of Bahrain as His Royal Highness Prime Minister Prince Khalifa bin Salman Al Khalifa is presented with the Shield of the Federation of World Peace and Love (FOWPAL) from the International Peace Culture Document and the International Peace Union Declaration in light of promoting the ideals of peace as a global culture.

The Federation of World Peace and Love commended HRH the Prime Minister’s role in promoting the culture of peace worldwide, through his contribution to reinforce the values and pillars of love, peace and co-existence regardless of religious, intellectual or cultural beliefs.

HRH the Premier expressed pride in the honor, describing it as a praise to the people of Bahrain who are partners in each and every achievement that the Kingdom accomplishes. He thanked FOWPAL for its pioneering role in spreading the culture of peace, which has become an urgent need amid ongoing conflicts and tension which pose huge challenges to world peace advocates. He also expressed thanks and appreciation for the noble sentiments shown by citizens, officials, civil society institutions, ministries and government bodies on granting him the peace award.

His Excellency highlighted key principles enshrined in the constitution of Bahrain, citing equality between cultures, religions and sects, citizenship rights and respect of human dignity for all citizens, beyond any discrimination on the basis of race, gender, language, religion or faith.

“The Kingdom of Bahrain stands out as a symbol of interfaith cohesion”, he said, adding that various faiths co-exist in Bahrain and followers exercise their rituals in total freedom.

The people of Bahrain are marked by diversity of religions and nationalities. They enjoy freedom and share a spirit of belonging to the larger community. They cherish shared hopes for their land, thus making Bahrain a model to emulate in the world. He stressed Bahrain’s policy of funding all official religious institutions on the same basis of equality which consolidates religious rituals.

“Some communities which prefer privacy are allowed to establish their worshipping venues and display their religious symbols without any interference from the government.”

Addressing the ceremony, H.E Shaikh Hussam highlighted Bahrain’s social and economic sustainable development strides, which improved citizens’ quality of life and enhanced the standard of healthcare and educational services. The Kingdom of Bahrain, he said, ranks among the few countries which succeeded in achieving and even exceeding the UN Millennium Development Goals, thus paving the way to meet the UN Sustainable Development Goals. He commended HRH the Premier for his decades-long efforts which has transformed Bahrain into a modern state with a vibrant economy and a sustainable future.

Addressing the ceremony, FOWPAL President Dr. Hong Tao-Tze paid tribute to H.R.H the Premier, hailing his dedicated efforts to support peace and co-existence in the region and the world as well as his farsighted vision which contributed to Bahrain’s development
and progress.

“FOWPAL shares with the Kingdom of Bahrain the lofty values of peace, respect, pluralism and human welfare for all people” FOWPAL President Dr. Hong Tao-Tze.

He hailed the leadership and statesmanship of His Royal Highness, which enabled the people of Bahrain to live in peace, serenity, happiness and prosperity. He stressed the importance of its cultural environment in establishing a quality educational system that contributed to Bahrain’s economic prosperity.

Dr. Hong Tao-Tze recalled his visit to Bahrain, stressing the Kingdom’s keenness on conserving its heritage as well as remarkable achievements and success in promoting balanced development.

The award is proof of Bahrain’s complete commitment to the goals and principles of the Charter of the United Nations and support towards the establishment and preservation of world peace, the promotion of economic development and the right of States to establish the type of government they choose in line with the values and aspirations of their people.

Bahrain has witnessed spectacular economic growth since the independence in 1971. The Kingdom has transitioned from a trading and agricultural economy, relying on pearls and dates, to the banking hub of the region, where modern industrial, business and service centers are on thrive.

Over the years, the Government has diligently used oil revenues to provide a modern physical and legal infrastructure in the Kingdom. The result is a vibrant economy, a well-educated and adaptable population, and a private sector ready for the global market.