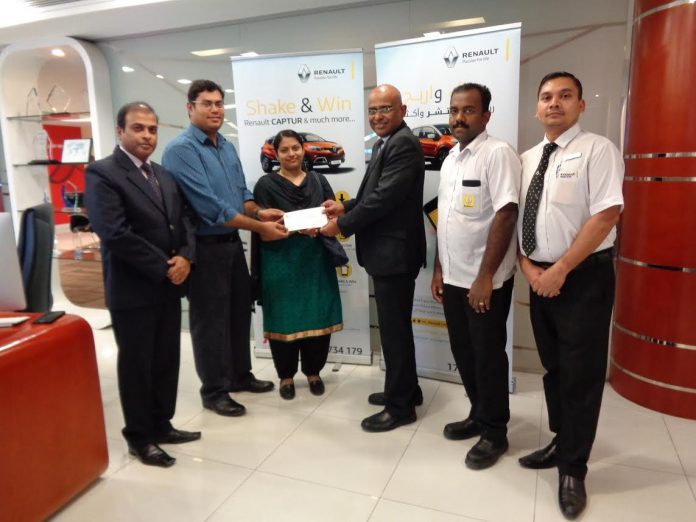 Y.K. Almoayyed & Sons, exclusive dealers of Renault in the Kingdom of Bahrain, are delighted to announce the winners of the ‘My Renault – Shake and Win’ campaign. Rahul Bhavan and Vincent Hua have emerged victorious winning gift vouchers for an accessories pack worth EUR 400 (BHD 160).

The contest required participants to download the application ‘My Renault’ on their mobile phones and on completion they were instructed to shake the device, following which their details were directly submitted to an online raffle draw for the chance to win rewards like one-year free service, an accessories pack and the grand prize of a Renault Captur.

The campaign ran from 27 November, 2016 to 10 January, 2017 across the region and included countries like Saudi Arabia, United Arab Emirates, Kuwait, Qatar, Bahrain, Oman and Egypt. The winners were randomly selected after the registered entries were exported to the online draw.

Mr. S Sreekumar, General Manager, Renault Bahrain said, “This was a unique opportunity for our customers to be able to connect with the brand and Y.K. Almoayyed & Sons are pleased with the overall response and success of the campaign. Besides, it was the ideal platform to bring customers together to build brand loyalty and create greater awareness of the My_ Renault app.”

The contest emerged with a total of 25 winners from Egypt and the GCC region. Four winners were announced every week. One lucky winner will win a brand new Renault Captur, which will be announced on 20 January, 2017.

The “My_Renault” App can be downloaded from Play Store and Apple Store.

The Kingdom of Bahrain shares with the State of Kuwait its celebrations of its 60th National Day and the 30th anniversary of its Liberation...
Inside Bahrain

The “Molecular Medicines Reports” journal published in January 2021 the results of a study conducted by the Medical Biotechnology Research Team in the College...
PR This Week

A new state-of-the-art Dialysis Center has been set up in Riffa, providing equitable and affordable access to the well-established Bahrain Specialist Hospital Nephrology &...
Inside Bahrain

The proceeds of e-payments for customs duties and taxes has exceeded BD 40 million in 2020, Customs Affairs Director General of Planning and Administrative...
Inside Bahrain

The National Health Regulatory Authority (NHRA) has authorized the emergency use of Johnson and Johnson’s vaccine for coronavirus (COVID-19). Janssen Covid-19 Vaccine is the fifth...
Sports This Week

Under the patronage of HM King Hamad bin Isa Al Khalifa, the King of the Kingdom of Bahrain, the 160-km race of HM the...
PR This Week

Bahrain Specialist Hospital, whose internationally recognized Center of Excellence for Women Care and a leading IVF Center in Bahrain, is offering couples a limited...
Wheels and Gears

The all-new Jaguar F-PACE and F-PACE R-DYNAMIC rev up in Bahrain as Euro Motors, the exclusive importer and distributor for Jaguar Land Rover, launches them...
Inside Bahrain

Gulf Air, the national carrier of the Kingdom of Bahrain, announces the addition of Singapore to its growing network with 1 weekly flight starting...
© GO ALIVE MEDIA
MORE STORIES