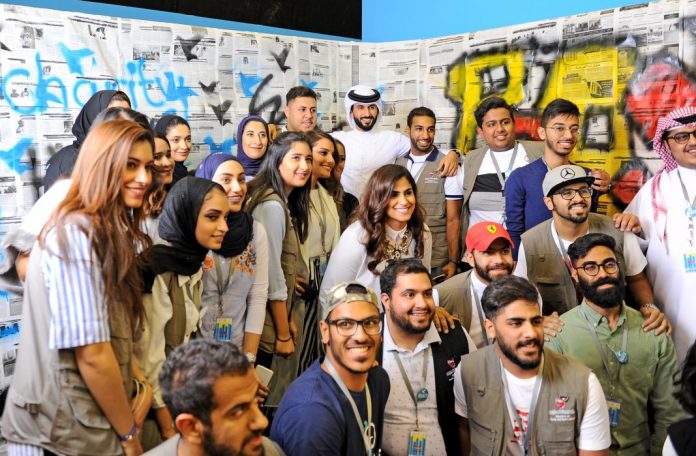 HH Shaikh Nasser bin Hamad Al Khalifa, Representative of His Majesty the King for Charity Works and Youth Affairs, Chairman of the Supreme Council for Youth and Sports, President of Bahrain Olympic Committee, paid a
visit  to the Youth City 2030 which is organised by the Ministry of Youth and Sports Affairs in cooperation with its strategic partner Bahrain Labour Fund (Tamkeen).

HH Shaikh Nasser was received by Minister of Youth and Sports Affairs HE Mr. Hesham bin Mohammed Al Jodar. In the outset of his visit, HH Shaikh Nasser toured the City, during which he was given a detailed explanation on the programmes organized by the Centre for Leadership Development. These programmes aim to develop the mental and personal aspects of the participants via allowing them to take part in special programmes centred on entrepreneurship and arts of discussions and presentation.

HH Shaikh Nasser was also briefed on the programmes being delivered in the other centres in the City, including the Media Centre, and the Arts Centre.

On this occasion, HH Shaikh Nasser congratulated the youth on their international day set by the United Nations under the theme “Peace Made by Youth”. HH Shaikh Nasser underlined that the selection of such a theme confirms the importance of the young people in sustainable development and in achieving peace as well as justice.

HH Shaikh Nasser pointed out that it is important for young people to give their ideas in order to present important initiatives that contribute to the global efforts to promote peace and international security and to resolve conflicts. HH Shaikh Nasser called for the opportunity for youth to discuss views, share experiences and set priorities for global security and peace.

Moreover, HH Shaikh Nasser bin Hamad Al Khalifa said that Youth City is keen on preparing young people to participate in achieving the goals of sustainable development by offering a line-up of programmes that comply with these goals.

HH Shaikh Nasser said that International Youth Day and its emblem inspired by Goal 16, would strengthen the role of youth and encourage them to participate actively in the maintenance of peace and security.

Finally, HH Shaikh Nasser expressed his utmost thanks and appreciation to HE Mr. Hesham bin Mohammed Al Jodar for his efforts towards making the initiatives delivered for youth a success. HH Shaikh Nasser also praised the Ministry of Youth and Sports Affairs members as well as the volunteers of the City.

From his part, HE the Minister expressed his absolute appreciation to HH Shaikh Nasser for visiting the City and viewing its activities. Moreover, Dr Ebrahim Mohammed Janahi hailed the enormous support given by HH Shaikh Nasser to the efforts of youth development, confirming the important role being played by youth in driving development in Bahrain.

Four Square Media & Display Solutions Co brings to Bahrain an immersive experience at The Mall of Dilmunia! Four Square was founded in the year...
Inside Arabia