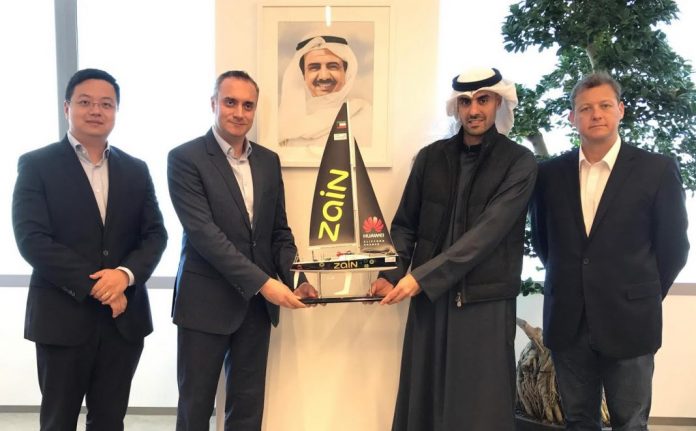 Zain Group, a leading mobile telecom innovator in eight markets across the Middle East and Africa, announces its participation, for the third consecutive year running, in the seventh edition of the EFG Sailing Arabia – The Tour (SATT) 2017 competition. This event organized by Oman Sail, is the Gulf region’s leading offshore race.

The Zain team has performed remarkably well over the previous two years finishing a sensational third in 2015 and even winning one of the legs; and a very creditable fifth in 2016. What makes these results more impressive is the fact that Zain’s sailing team compromises mainly amateur sailors.

In a bid not to alter a positive alliance, Zain has again partnered with global technology provider Huawei and global law firm Clifford Chance to race a high-performance racing yacht – a ‘Farr 30’- which will include corporate branding from all three partners. The Zain team continues to benefit from the close support and patronage of Zain Vice- Chairman, Bader Al Kharafi, who has been a central part of the sailing crew over the last two years.

The new 763 nautical-mile race will commence on 14 February, 2017 and see the fleet of identical Farr 30s start their campaign in Muscat where they will be able to score points in the first in-port race. From there they will head north on the first leg to Sohar, a relatively short sprint of 105 nautical miles. The second leg takes them to Khasab, the capital of the Musandam Peninsula, which was included in the Tour for the first time last year, before the fleet heads to Abu Dhabi in a 153 nautical-mile leg. It will be back to sea for a 160 nautical-mile dash to Doha in Qatar where more points will be on offer in the second round of in-port races, ahead of the last and longest leg (205 nautical miles) to Dubai, which will count for double points. The race will end on 1 March, 2017.

The EFG SATT delivers high level racing, attracting top amateur and professional sailors from four continents in one of the most beautiful sailing destinations. The Farr 30 is one of the most exciting boats on the professional sailing circuit and as a one-design event, the focus is on skills: the intense racing stretches each crew to the limit, testing their stamina, teamwork and versatility.

The eight-person crew includes sailing novices from Zain’s management ranks, together representing a very mixed level of sailing proficiency. As in previous years, they will be led by two sailing veterans, Cedric Pouligny, the skipper; and Gerald Veniard, the navigator, who are previous winners of the EFG SATT race. They will race against teams from the UK, Switzerland, Monaco, Italy, The Netherlands, UAE and Oman.

Commenting on Zain’s participation in this annual event for the third time, Zain Group CEO Scott Gegenheimer said, “Our participation in this exhilarating sailing competition for the third consecutive year highlights the positive impact it has had on the participants in years past, as well as the sense of achievement and confidence it offers our entire organization. The SATT really is a world-class event and from both a team-building point-of-view and as a brand-building opportunity, the sailing race epitomizes the best of what our region has to offer as a positive spectacle.”

Gegenheimer added, “We recognize that sailing has an important cultural legacy in the region and I wish our crew this year all the very best, and want them to know that I will be following their progress actively, as will 7,000 Zainers across our operations.”

In its short history, EFG SATT has gained global recognition, and now in its seventh year, the Tour has become one of the most respected and dynamic sailing regattas on the international circuit.

Supporting Zain’s participation in the sailing race are two key strategic business partners.  Huawei is one of the world’s leading suppliers of mobile telecom equipment and smartphones, and is marking its 17th year of operation in the Middle East. The company is a major supporter of sport across the GCC, and has a strong interest in promoting sustainable business around the world. Clifford Chance is a leading global law firm, which has worked with Zain for decades. This year Clifford Chance marks 42 years in the Middle East, having advised on many high-profile transactions including several large sporting events.

More information on the EFG SATT 2017 can be found here: www.sailingarabiathetour.com  and on #zainsailing.