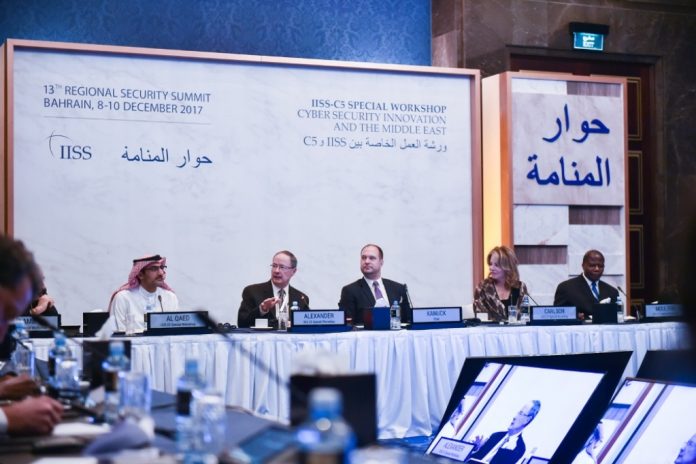 AlQaed Participates in a Panel Discussion of the Manama Dialogue

Information & eGovernment Authority (iGA) Chief Executive Mr. Mohamed Ali AlQaed stated that today our society witnesses rapid developments in spreading technology that has become a major part in most of our services and massively contributed in facilitating the services as well as reducing its costs by saving tens of millions. He also added that such wide spread has accompanied an increase in the risks of several penetrations and cyber-attacks that reach the most vital sectors and targets infrastructures. Thus, they have become a concern for public and private entities as well as individuals.

The Chief Executive further commented that in light of this technological advancement, the Authority seeks – in collaboration with all the entities in the Kingdom – to address these cyber-attacks and threats. It will also cooperate with the Anti-Economic Crimes Directorate at the Interior Ministry’s General Directorate of Anti-Corruption & Economic & Electronic Security in order to detect cyber-crimes, in line with the concern and follow-up of the Interior Minister H.E. Lt. General Shaikh Rashid bin Abdulla AlKhalifa.

AlQaed also indicated that the nature of the cyber-crimes today has changed and is used for political, racial, religious or other motives. Here is where the role comes of the Anti-Economic Crimes Directorate – in partnership with the Telecommunications Regulatory Authority and domestic telecommunication service providers – in tracking down criminals; in terms of investigation and coordination with concerned countries and taking the required procedures in this regard. As security risks are in constant growth and innovative development, AlQaed confirmed the importance of working according to a coherent strategic vision of the IT infrastructure on a national level out-of-which its main element is unified collaborated efforts for all employees in the public and private sectors as well as the importance of applying the latest systems, policies and security procedures issued in this field.

AlQaed also highlighted the importance of the human element in terms of sharpening its skills and gaining new experiences as iGA initiated a series of security awareness programs and specialized training courses all-year-long for public sector employees. Through the Thiqa (Cyber Trust) program and across its three levels (Practitioner, Progressive and Excellent); the Authority also evaluates and measures employees’ efficiencies and readiness in facing and addressing cyber security risks.

He further commented that work between the Authority and the Computer Energy Response Team (CERT) is underway where more than 50 security warnings have been sent to CERT customers during 2017. These warnings demonstrated the seriousness of cyber security risks, latest developments of attacks, risks relevant to cyber security along with the methods of detecting them and protection. On the other hand, the (Cyber Hawks) initiative contributed in increasing the collaboration amongst various public entities to detect and address possible penetration attempts as well as contain them as fast as possible. He noted that iGA implemented the first cyber drill simulates reality to ensure and protect the electronic systems, impact of security accidents and attacks together with setting solutions and policies to address them.

This came about during AlQaed’s participation in the special Panel Discussion entitled ‘Cybersecurity Innovation and the Middle East’ during the IISS Manama Dialogue: 13th Regional Security Summit event hosted by the Kingdom of Bahrain from 8th-10th December with the attendance of ministers and senior officials from the Gulf and the World.

During the Panel; the most significant strategic developments were discussed in the Internet field for 2017, security and advancement in the Gulf region, the role of innovation in the technology field as well as its impact on Cybersecurity. Additionally, the roles of investment and education in this field, global policy speech and during the end of the discussion questions and inquiries of attended participants were welcomed.

The Ministry of Health announced that all travellers arriving into Bahrain International Airport from 12:00 am on Tuesday, July 21st, 2020, will be required...
Read more
Spotlight

As leading technology companies are planning to make remote working the ‘new normal’ and users of major virtual conference services such as Zoom and...
Management Principles

BRAVE Combat Federation, a product of His Highness Shaikh Khaled bin Hamad Al Khalifa's vision, is back to holding events across the world, taking...
Tech