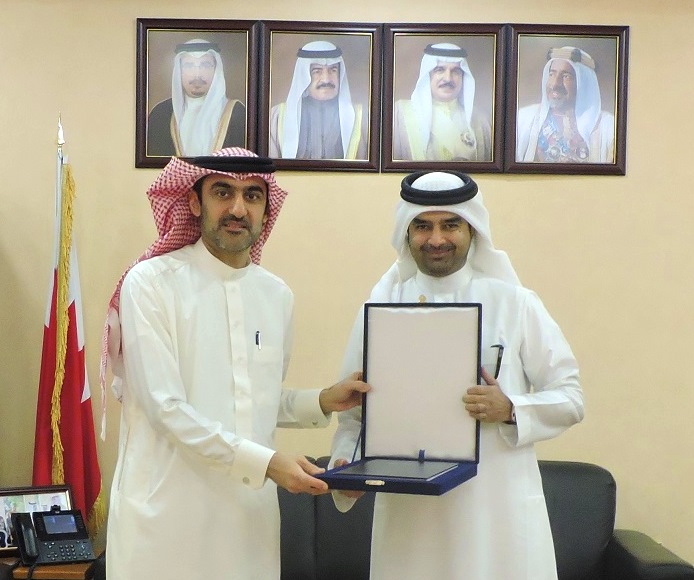 Mr. Mohamed Ali AlQaed, CE of Information & eGovernment Authority (iGA), welcomed Dr. Mohamed Tayeb Mahmood to receive a copy of the Ph.D. that he was recently granted by Brunel University London, UK. The thesis was under the title ‘Government Digital Transformation and its Role in Enhancing Citizen’s Trust in the Government’.

AlQaed praised the thesis along with the significant aspects it covers including the factors that influence government digital transformation and the role of public entities in adopting the digital transformation policy when improving government performance and its services as well as achieving customer’s satisfaction. Furthermore, strengthening citizen’s trust in the government and the services provided by public entities. The CE also wished him all the best and success in his career life.

The Chief Executive also congratulated Dr. Mohamed for completing such valued thesis which is considered one of the first academic studies in this field within the Kingdom and the region. He also highlighted that it is without-a-doubt a qualitative addition to the National Library in the government’s strategy of government digital transformation in line with Bahrain’s Vision 2030.

Dr. Mohamed’s study was concluded with the presence of influential factors in strengthening citizen’s trust in the government by its direction (as a whole) towards digital transformation, adoption and activating the transparency as well as accountability principles of the government. Moreover, meeting the needs and expectations of the citizens from public entities along with the necessity to optimally benefit from the eGovernment system as well as modern technology in enhancing such trend. These factors undoubtedly play a vital role in improving government performance and citizen’s satisfaction with the government and its services.

Although Coronavirus precautionary measures are easing, it’s still important to be responsible and choose the safer option whenever possible. Patients in need of prescription...
Read more
iGA

If you’re looking for the most convenient method of updating government records of your official address, then your best bet would be to do...
Read more

Zain Bahrain, a leading telecom operator in the Kingdom, is taking a further step in offering the latest technologies through officially launching its 5G...
Read more
Entrepreneurial Journey

I never thought of advertising my business when I was a small shopkeeper. The word-of-mouth publicity among customers was sufficient for me in those...
Wheels and Gears

Al Haddad Motors have recently handed over a fleet of Mercedes-Benz Certified Pre-Owned Trucks to Ameenco at the Mercedes-Benz Customer Service Centre located in...
Wheels and Gears

In line with its strategic corporate initiative, stc Bahrain is launching the third edition of its ‘Arts and Culture’ platform – a community engagement...
PR This Week

Bahrain's National Space Science Agency (NSSA) has clinched first place in a training programme, entitled “Advanced Geoinformatics”, organised by the University of Twente, the...
Inside Bahrain

A ban on afternoon work in open spaces throughout Bahrain will start on Wednesday, the Ministry of Labor and Social Development has said. The annual...
Tech

Google is expanding the ways you can make video calls on smart displays powered by Google Assistant with new support for group calling in...
PR This Week