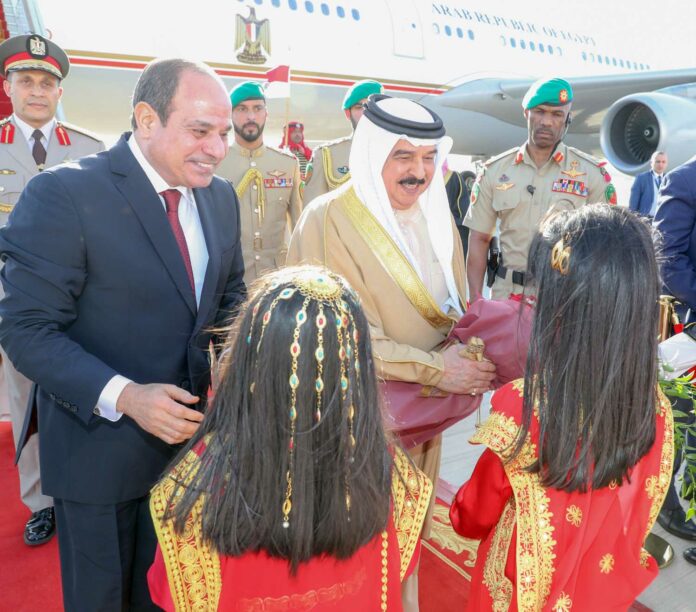 HM the King and President El-Sisi reviewed the distinguished fraternal relations between the two countries, as well as ways to bolster bilateral cooperation across various fields, affirming the importance of continuous consultation and coordination between both sides for the benefit of their two brotherly peoples.

HM King Hamad expressed the pride of the kingdom and its people in the Egyptian President’s visit, which will boost the bilateral strategic relations and joint action at all levels, praising the pivotal and effective role played by Egypt in the Middle East region, being an essential pillar of the Arab and regional security.

President El-Sisi renewed his thanks and appreciation to HM the King for the warm welcome and hospitality accorded to him, praising the constant keenness of HM King Hamad to strengthen the solid Bahraini-Egyptian relations. He also wished the Bahraini people further progress and prosperity, under HM the King’s leadership.

The two leaders also discussed the latest Arab developments, in addition to a number of regional and global issues of mutual interest.

Then, HM the King, President El-Sisi and HRH the Crown Prince and Prime Minister attended the signing of the following agreements and memoranda of understanding between the two countries:

–     An agreement on the establishment of the Bahraini-Egyptian Intergovernmental Committee for Trade, Economic, Scientific and Technological Cooperation. It was signed by Finance and National Economy Minister, Shaikh Salman bin Khalifa Al Khalifa, on behalf of Bahrain, and Foreign Affairs Minister, Sameh Shoukry, on behalf of Egypt.

–     An executive programme in the field of education (2022-2023). It was signed by Bahrain’s Foreign Affairs Minister, Dr. Abdullatif bin Rashid Al-Zayani, and his Egyptian counterpart, Sameh Shoukry.

–     An executive programme in the field of environment protection (2022-2024). It was signed by Bahrain’s Foreign Affairs Minister, Dr. Abdullatif bin Rashid Al-Zayani, and his Egyptian counterpart, Sameh Shoukry.

HM King Hamad and President El-Sisi hailed the signing of the agreements and MoUs between the two brotherly countries, affirming that they will contribute to further strengthening bilateral relations and broadening joint cooperation.

Then, Poet Mohammed Hadi Al Halwaji recited a poem before HM the King and President El-Sisi.

HM the King hosted a lunch banquet in honour of the Egyptian President and his accompanying delegation.