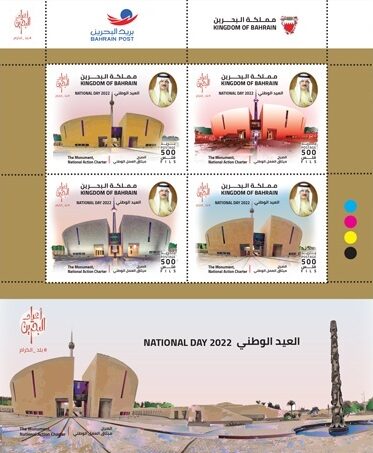 The Bahrain Post at the Ministry of Tranportation issued a set of four stamps featuring a portrait of His Majesty King Hamad bin Isa Al-Khalifa, marking Bahrain’s National Days, in commemoration of the establishment of the modern Bahraini state as an Arab and Muslim country founded by Ahmed Al Fateh in 1783, the anniversary of its full membership in the United Nations, and the anniversary of His Majesty the King’s accession to the throne.

Bahrain Post has chosen this year the National Action Charter and its impressive edifice, as the theme of its new issue, in commemoration and documentation of national events, the most important of which is the document that crystallized Bahrain’s reform project and contributed to its comprehensive renaissance.

The names of more than 220,000 citizens who participated in the referendum on the Charter were carved on the walls of the National Action Charter, a cultural milestone distinguished by its unique architecture.

The commemorative stamps, in denomination of 500 fils and a set of the first day issue at a price of two and a half dinars, are available at the Postal Museum and all branches of Bahrain Post.