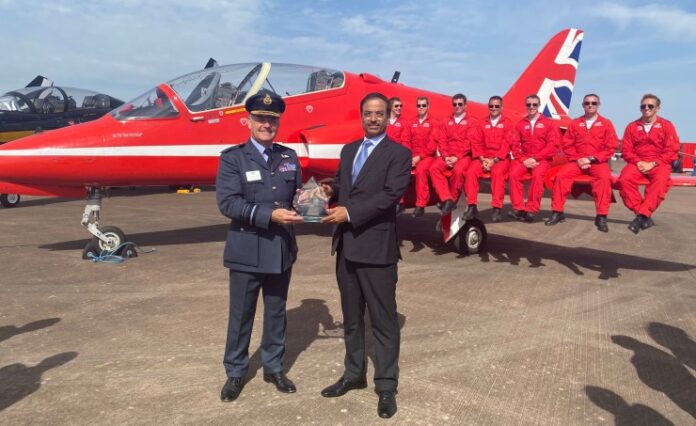 The Ministry of Transportation and Telecommunications announced that the popular Royal Air Force Aerobatic Team, the Red Arrows, will perform at the Bahrain International Airshow (BIAS 2022) or the first time in its ten year history.
The announcement to perform at the Bahrain show was made at the Royal International Air Tattoo at RAF Fairford, where the UK Defence Senior Advisor to the Middle East, Air Marshal Sammy Sampson met with Minister of Transportation and Telecommunications, Mr Mohammed bin Thamer AlKaabi.

BIAS, under the patronage of His Majesty King Hamad bin Isa Al-Khalifa, is held every two years and is scheduled to take place this year from November 9-11 and the Sakhir Airbase.
His Highness Shaikh Abdullah bin Hamad Al Khalifa, Personal Representative of His Majesty the King and Chairman of the Supreme Organising Committee of BIAS said: “We are very pleased to welcome the Red Arrows to our airshow this year, which marks ten years of success in bringing some of the top global players and flying teams to Bahrain. This is yet another successful outcome of Bahrain’s long-standing relationship with the UK.”
BIAS is organised by the Bahrain Ministry of Transportation and Telecommunications and the Royal Bahraini Air Force, and builds on long established relationships with key partner countries. Specifically, the UK Royal Air Force and the Bahrain Defence Force (BDF) have enjoyed decades of military cooperation, with the BDF playing an active role in BIAS, assisting with the military delegations programme.

UK Secretary of State for Defence, Ben Wallace, said: “The Red Arrows represent the RAF’s commitment to excellence – the dedication of the team’s pilots and ground crews ensure they perform world class displays.
The UK has enjoyed a long and prosperous partnership with Bahrain. Both nations benefit from these strong links and this Red Arrows tour represents the UK’s commitment to maintaining these links.”
The Red Arrows will be taking part in a Gulf tour in Bahrain, Kuwait, Saudi Arabia and the UAE, following completion of the team’s busy domestic season and will use the opportunity of their presence at BIAS to also carry out a series of displays, flypasts and ground events elsewhere while in the region.
In addition to the air displays, the team will also conduct a series of ground events including business seminars and sessions aimed at inspiring young people by using the Red Arrows to highlight the importance of science technology, engineering and maths.
The displays and associated ground engagements are an opportunity to further develop the longstanding diplomatic, military and trade relations between the Kingdom of Bahrain and the United Kingdom.

Speaking about the announcement, Mohammed bin Thamer AlKaabi, Minister of Transportation and Telecommunications said: “The air displays at Bahrain International Airshow are one of its main features which we strive to expand on so we are thrilled to announce that we are hosting one of the world’s premier aerobatic display teams at BIAS and which I am certain will add significant value to our flying display programme.”
Air Marshal Sammy Sampson, said: “It is with great pleasure that I can announce that the Red Arrows will be in Bahrain later this year. The Bahrainis are a vital partner for UK Defence and I am sure that the Red Arrows will put on a spectacular show there as well as carrying out inspirational ground activity.”
Over the last 10 years, the Bahrain International Airshow has established itself as a leading event for aviation with more than 50,000 trade visitors expected in 2022 and some 215 military and civilian delegations in attendance between November 9th and 11th.
For more information about BIAS, please visit Bahrain International Airshow’s website , or follow us on Instagram @bahraininternationalairshow
For more information on the Red Arrows and the tour: follow @redarrows on Twitter, or visit the RAF Red Arrows website.