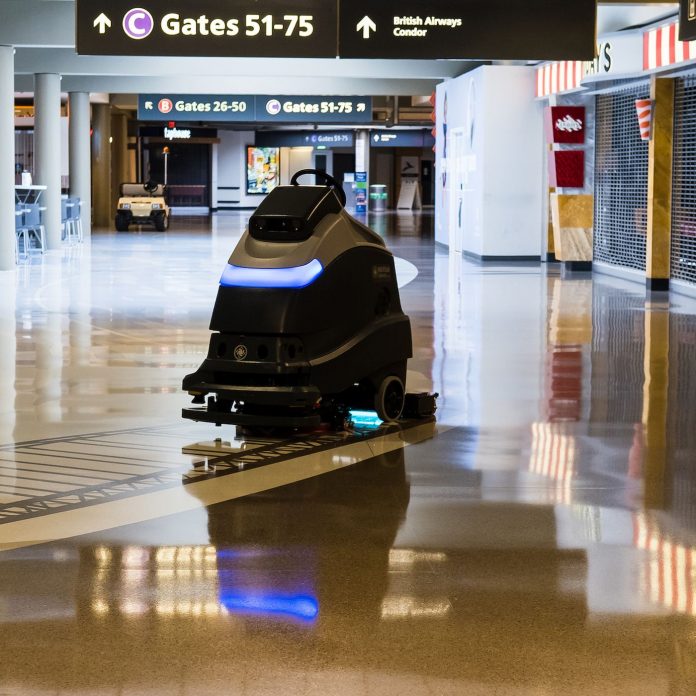 Pittsburgh International Airport has put UVC fixtures on its floor-cleaning robots, making it the first airport in the US to test the use of the ultraviolet rays to scrub the coronavirus from surfaces. If effective, the UV-cleaning robots could be a model for other airports as they plan to reopen and try to persuade people to travel again.

“We have a whole innovation culture that is looking for ways to do things better, especially in the pandemic,” Cassotis said. “And one of the things that we recognized immediately is that while we have to manage the crisis day to day we have to keep a line of sight into the future, to help inspire confidence in travel again.”

She said they were starting to have those conversations internally when Carnegie Robotics CFO Daniel Beaven called her and said he had an idea to retrofit the airport’s existing floor scrubbers with UV lights.

UVC light is the same technology New York City will start using to sanitize its subway system next week. While UVC rays are known to be effective at killing viral particles, including other coronaviruses like MERS, it’s still unknown how effective they are against the virus that causes COVID-19.

Carnegie Robotics developed the AI and robotic systems for the Nilfisk floor scrubbers so they can map and clean an area autonomously. Now, after cleaning the floor surface with water pressure and chemical disinfectant, the UVC light will pass over the airport’s floors for a deeper cleaning.

The partnership with the airport and Pittsburgh-based Carnegie Robotics is a potential model for other airports, and it also highlights Pittsburgh’s status as a robotics hub. It’s the latest sign of the airport’s focus on tech innovation. In 2018, the airport announced it was partnering with Carnegie Mellon University for the Metro21: Smart Cities Institute, to develop tech projects for the aviation industry.

Like other airports, Pittsburgh International has seen a sharp drop-off in flights during the coronavirus pandemic. The number of daily travelers is usually around 13,000, but it has dwindled to a few hundred a day. Many of the shops in the terminals have closed, and a planned $1.1 billion renovation has been put on hold.

Cassotis said working with companies like Carnegie Robotics is part of PIT’s larger organizational philosophy that an airport should be part of its community. “We’re not just the gateway to the region, we want to bring forward its best assets,” she said. “We want to make sure we’re taking care of passengers and staff. That bubbles up from the bottom and down from the top.”

Established in 1940, at the start of World War II, Y. K. Almoayyed & Sons is the result of late Mr. Yousuf Khalil Almoayyed’s...
Tech

It’s one thing to read about the massive dinosaurs that used to roam the Earth; it’s quite another to imagine how they’d look stomping...
Management Principles