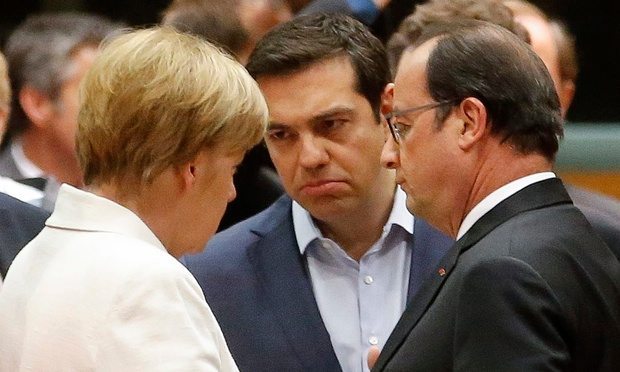 European leaders have confronted the Greek government with a draconian package of austerity measures entailing a surrender of fiscal sovereignty as the price of avoiding financial collapse and being ejected from the single currency bloc.

Drama unfolded over a weekend of high voltage action on Greece crisis, that threatened to break Europe in two climaxed on Sunday night at a summit of eurozone leaders in Brussels where the German chancellor, Angela Merkel, and President François Hollande of France presented Greece’s radical prime minister, Alexis Tsipras, with an ultimatum.

In what a senior EU official described as an “exercise in extensive mental waterboarding” to secure Greek acquiescence to talks on a third bailout in five years worth up to €86bn (£62bn), the two leaders pressed for absolute certainty from Tsipras that he would honour what was on offer.

In a benevolent gesture that reflects the Bank’s appreciation to the noble national efforts exerted in light of the challenging circumstances witnessed by Bahrain...
Tech

The American University of Bahrain (AUBH), re-opened its campus in Riffa, following an orientation session for the incoming Class of 2024 students. AUBH Founding...
iGA

Obtaining or renewing visas in the Kingdom of Bahrain is a relatively simple procedure. All you need to do is ensure that your documents...
© GO ALIVE MEDIA
MORE STORIES