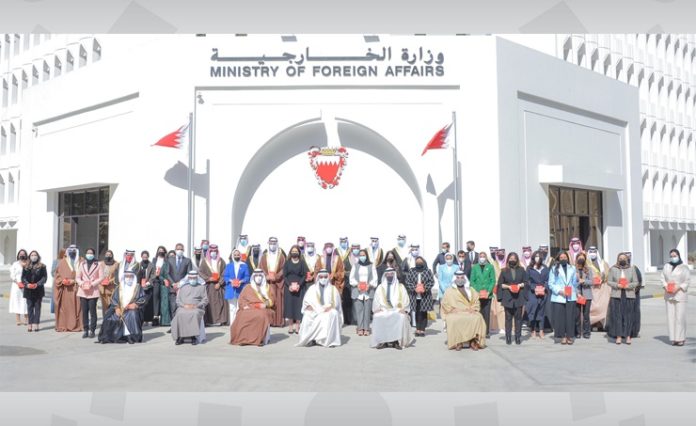 Minister of Foreign Affairs, Dr. Abdullatif bin Rashid Al-Zayani, in the presence of the Ambassador of the Kingdom of Bahrain to the United Kingdom, Shaikh Fawaz bin Mohammed Al Khalifa, Acting Undersecretary for Consular and Administrative Affairs, Ambassador Khalil Yaqoub Al-Khayat, and a number of chiefs of sectors and directorates, handed over the “Prince Salman bin Hamad Medal for Medical Merit” to national competencies of the Ministry of Foreign Affairs, in recognition of their efforts during the COVID-19 pandemic.

The Minister of Foreign Affairs congratulated the employees, expressing his thanks and appreciation for their sincere efforts in facing the pandemic.

He affirmed that the pride of His Majesty King Hamad bin Isa Al Khalifa, and the appreciation of His Royal Highness Prince Salman bin Hamad Al Khalifa, the Crown Prince and Prime Minister, for the national efforts of all front-line workers to address the pandemic, including cadres from the health sector, the Bahrain Defence Force, the Ministry of Interior, and all supporting authorities, further motivate all citizens to exert their utmost efforts in order to serve the Kingdom, its citizens and residents.

The Foreign Ministry’s employees expressed their pride in receiving such high honour, affirming that it will further encourage them to serve the Kingdom of Bahrain.