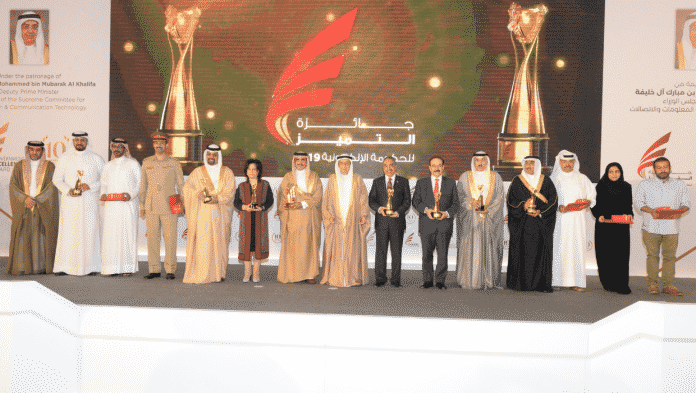 His Highness Shaikh Mohammed bin Mubarak Al Khalifa – Deputy Prime Minister, Chairman of the Supreme Committee for Information and Communication Technology – patronized the eGovernment Excellence Award 2019 Ceremony and 10 years of launching the award at the Gulf Hotel. The event was attended by Their Excellencies Chairmans of Shura Council and Council of Representatives along with Their Highnesses Deputy Prime Ministers, a number of Excellencies, Ministers and guests.

“I am pleased to patronize this annual ceremony of the award,” stated His Highness, Shaikh Mohammed bin Mubarak Al Khalifa who continued that the Kingdom of Bahrain has achieved quantum accomplishments in the ICT field and is keeping abreast with the rapid international advancements in light of the informatics evolution. This is evidence on its adoption of its advanced positions on the competitive level regionally and internationally within the ICT.

“Since its launch in 2008, the eGovernment Excellence Award is one of the most significant national initiatives that has clearly contributed in encouraging innovation and established the principle of excellence. It has enabled growth in the ICT sector. Its delivery for the culture of knowledge amongst society segments and entities has represented a base of developing services and support of infrastructure as well as sustainable development,” His Highness continued.

“Adopting initiatives that motivate innovation and excellence has made the Kingdom of Bahrain a model of modernization and progress regionally in the field of supporting online excellence. The Award has added to Bahrain’s records of accomplishments – the latest being achieving the 26th rank globally and 5th in Asia, 4th internationally in the Telecommunications Infrastructure index,” he elaborated.

“This year’s Award encompasses nine categories including introduction of new categories in the Private Sector that aims at showcasing its services aspect to beneficiaries. It also continuous to highlight various outstanding national initiatives in the ICT sector in order to develop programs, services and projects addressed through a comprehensive digital system which reflects the true direct support of the government to ministries and governmental entities to set policies and necessary legislations as well as provide advanced high-quality services.”

“Our celebration today of the eGovernment Excellence Award 2019 winners is only an appreciation of their contribution and creativity. We always seek to continue the Award in the following years. Furthermore, we congratulate them all for what they have presented from outstanding projects that made them reach the honoring platform. We also express our gratitude to the members for the Jury Committee, organizers and concerned entities throughout the past years for their efforts. Additionally; thank all participants who enriched the award with their projects, winners who put forward unique projects that qualified them to win with a merit. He wished them all the best of luck and success achieving the best future in this field,” he concluded.

Winning projects in the Government Sector comprised ‘Best Government-to-Government eService (G2G)’ the Ministry of Interior’s Takatuf Service developed in collaboration with the Supreme Council for Women, along with Ministry of Finance & National Economy for its Government Integrated Procurement Management System; the award ‘Best eGovernment Integrated Services for Individuals or Businesses’ was won by the Ministry of Works, Municipalities Affairs & Urban Planning (Municipalities Affairs) for its Benayat Building Permit System. Bahrain Authority for Culture & Antiquities’ Social Media accounts won the ‘Best Practice in Community eParticipation’ award; and the award ‘Best Application for Smart Devices’ was granted to the Electricity & Water Authority for its EWA App; lastly, the ‘Best eGovernment Website’ award was granted to the Central Bank of Bahrain for its website.

During the ceremony, Information & eGovernment Authority (iGA) Chief Executive Mr. Mohamed Ali AlQaed expressed his gratitude for His Highness Shaikh Mohammed bin Mubarak Al Khalifa for his generous patronage for the award and support since its first launch in 2008. He also expressed his pride for holding the award’s 10th year hand-in-hand with concerned public entities. Furthermore, he stressed that this accomplishment is not limited to the IT sector alone but has exceeded by developing and strengthening the IT infrastructure which the Kingdom of Bahrain holds today. He also congratulated the winners who well-deserved the honoring of His Highness for the excellent projects and concepts they have submitted. He also emphasized that the award has directly contributed to government competition of encouraging technological initiatives according to the latest practices and has raised the quality level and efficiency of eServices provided to citizens and residents in the Kingdom by being keen on encouraging the principle of eParticipation and opening the doors in front of entrepreneurs in the technology sector in line with directives of the Government Action Plan.

AlQaed also addressed, through his presentation, the role the Award played throughout the ten years by its mark in the ICT sector locally and regionally and on both the public and private sectors in addition to individuals considering that it is a strategic platform for the Information & eGovernment Authority that highlights the ICT leading initiatives in the Bahraini society.

Moreover, he indicated that the award has set the quality marks on the façade of major national projects which have been launched as emerging projects and had won by the award. It has developed and climbed the leadership ladder across the past years and today became comprehensive, integrated systems linked with all relevant entities after it had been a major drive for the development process – whether these projects have been public or private.

During the ceremony, a short documentary film was presented to showcase the eGovernment Excellence Award’s journey throughout the 10 years. It showcased the broad milestones of the award along with distinguished developments and innovation.

Event patron toured in the accompanied exhibition of the award which comprised around 30 winning projects and initiatives that were nominated to win. Alongside, special projects selected this year by the Jury Committee for the presented distinguished technological solutions. 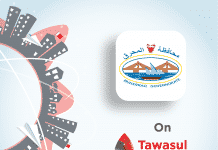 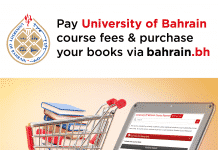 A UOB Student? Pay your course & books fees with one click!