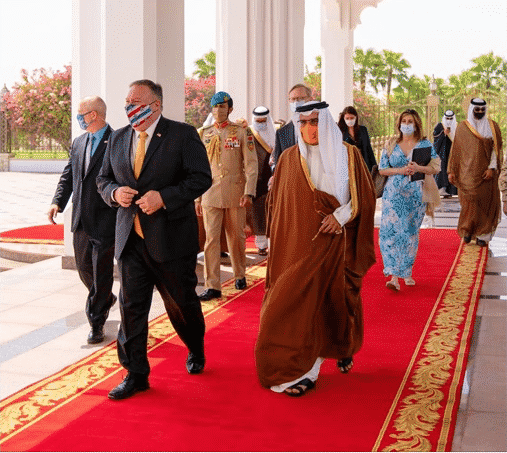 HRH the Crown Prince meets the US Secretary of State

HRH the Crown Prince highlighted the depth of historic relations between the Kingdom of Bahrain and the United States of America, which are based on strategic cooperation, strong partnerships and continuous coordination at all levels, delivering the shared interest of both countries and their peoples.

HRH the Crown Prince welcomed the visit of the US Secretary of State, during which both reviewed the bilateral relationship and examined opportunities to further strengthen it. HRH the Crown Prince underscored the Kingdom’s commitment to continuing the advancement of Bahrain-US strategic ties. 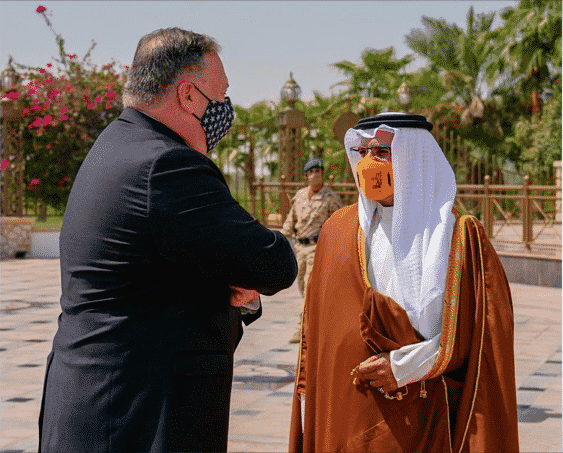 During the meeting, ongoing efforts towards achieving stability and peace in the region were examined, in addition to discussions on regional and international developments, as well as issues of common concern.

HRH the Crown Prince welcomed steps made by the United States to reach an agreement between the United Arab Emirates and Israel to stop the annexation of Palestinian lands.  HRH the Crown Prince noted the importance of re-doubling efforts to realise a just solution which utilises peace as a strategic option to end the Palestinian-Israeli conflict.

HRH the Crown Prince noted the importance of the international community’s solidarity in combating terrorism and support towards efforts aimed at tackling the promotion and financing of terrorist groups and eradicating them at source. In this regard, HRH stressed the need to adhere to good-neighbourly relations and mutual respect for the sovereignty and independence of states and to reject Iranian threats, including the launch of ballistic missiles on countries in the region.

HRH the Crown Prince pointed to the need to activate measures which rid the Middle East of nuclear weapons and weapons of mass destruction, whilst emphasising Bahrain’s support for the production, development and use of nuclear energy for peaceful purposes in accordance with international law.

For his part, the US Secretary of State, Mike Pompeo, expressed his thanks and appreciation to HRH the Crown Prince for his commitment towards strengthening bilateral relations, and noted the longstanding depth of strategic relations between the United States and Bahrain.

His Highness Shaikh Nasser bin Hamad Al Khalifa, Representative of His Majesty the King for Charity Works and Youth Affairs, National Security Advisor and Chairman of the Supreme Council for Youth and Sports, HE Dr. Abdullatif bin Rashid Al Zayani, Minister of Foreign Affairs, HE Shaikh Salman bin Khalifa Al Khalifa, Minister of Finance and National Economy and Mr. Brian Hook, US Special Representative for Iran and Senior Policy Advisor to the US Secretary of State, were also in attendance.

Gulf Air, the national carrier of the Kingdom of Bahrain, announces that it has resumed its direct flights to and from Dhaka’s Hazrat Shahjalal...
Read more
Inside Bahrain