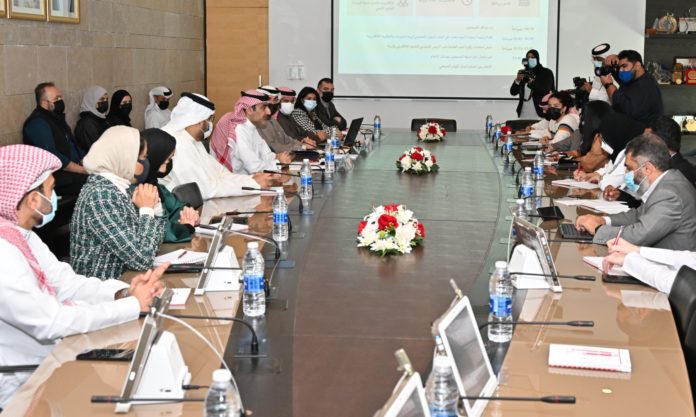 The support offered by His Majesty King Hamad bin Isa Al Khalifa, and the Crown Prince and Prime Minister, His Royal Highness Prince Salman bin Hamad Al Khalifa for providing advanced, convenient, and accessible government services is in line with the objectives of the Kingdom’s national digital transformation strategy, Information & eGovernment Authority (iGA) Chief Executive, Mohammed Ali Al Qaed said. Improvements to the efficiency of government processes and the streamlining of procedures form the pillar of that strategy, which benefits all individuals and organizations.

Al Qaed said that the iGA is committed to achieving the senior leadership’s vision and implement the directives of the Supreme Committee for Information and Communication Technology (SCICT), chaired by Deputy Prime Minister, HH Shaikh Mohammed bin Mubarak Al Khalifa to accelerate the launch of digital strategies and technical initiatives. He also reaffirmed implementing the directives of the Minister of Interior, Lt. Gen. Rashid bin Abdullah Al Khalifa to enhance services within the government sector and work with all public and private organizations to improve their offerings in a way that benefits citizens and residents.

He added that the iGA, in line with the Kingdom’s digital transformation strategy and deployment of Artificial Intelligence (AI), made several accomplishments in eight areas of government including transportation and telecommunications, real estate and housing, sports and youth affairs, traffic and others, which underlines its continuous efforts to remain in line with the eGovernment sustainable development strategy and the objectives of Bahrain Economic Vision 2030.

Al Qaed was speaking at a press conference held at the iGA‘s premises in Muharraq to highlight the government’s 2021 digital transformation achievements and its upcoming action plan. iGA Deputy CE of Electronic Transformation, Dr. Zakareya Ahmed AlKhajah and other senior officials were also in attendance.

Al Qaed said that the iGA will continue the deployment of advanced technologies and systems for the provision of convenient eServices via smart channels and devices, which have become ubiquitous in Bahrain during the current growing digital culture, resulting in 91% of users opting for eServices rather than traditional methods. He highlighted iGA initiatives that align with these directives, such as the revamped National Portal, self-service kiosks, and the BeAware Bahrain app.

He added that the iGA continues its digital transformation efforts with complete transparency and commitment to quality across the government sector, reflecting its adherence to the leadership’s aspirations and government directives towards achieving the highest global standards and meeting the needs of all entities.

Dr. AlKhajah said that 2021 was an exceptional year for digital transformation, as reflected in the statistics and indicators gathered. Revenues from online transactions crossed the BD500 million mark for the first time, representing a 116% increase. There were more than 15 million visits to the National Portal, an increase of 37% from 2020, as a result of initiatives and strategies designed and implemented meticulously over the last two decades.

He said that the iGA, since the launch of the Kingdom’s digital transformation strategy and up until the end of 2021, had provided over 563 eServices via online channels. A total of 434 of these are offered through the National Portal, bahrain.bh, 19 through self-service kiosks, and 110 via smartphone apps that can be downloaded from the eGovernment Apps Store, bahrain.bh/apps. In 2021, 57 eServices for eight sectors were launched by the iGA, in cooperation with relevant government entities, in addition to the development of eight systems.

There was also an 86% reduction in government operational expenses as a result of restructured procedures, which led to a 77% reduction in the time needed to complete transactions. This helped safeguard the public’s health during the pandemic, as there was almost no need to visit service centers. Financial transactions at all government entities increased by 65% compared to 2020, exceeding 3.7 million.

The Ministry of Interior launched the lion’s share of new eServices in 2021, 38 in total, including 18 for the General Directorate of Traffic (GDT); six for the iGA; five for Nationality, Passport and Residence Affairs; four each for Civil Defence and the Guards Training School; and one for Customs Affairs. There were six for Ministry of Housing, one for the Real Estate Regulatory Authority (RERA), five for youth and sports, four for transportation and telecommunications, two judicial services, and one for the Supreme Council for Environment (SCE).

Make Your Voice Heard through the Customer Satisfaction Survey on Bahrain.bh

Users can easily update their own ID card details online