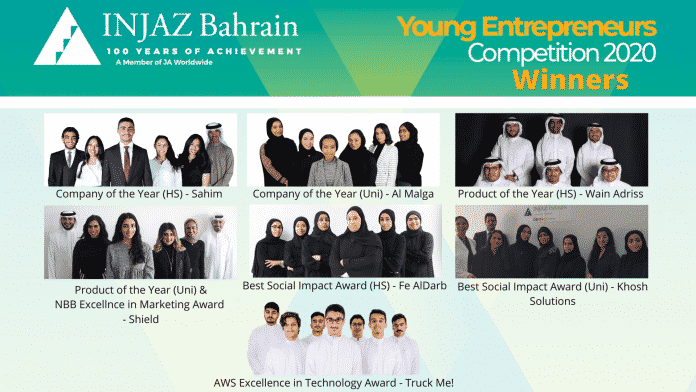 INJAZ Bahrain has successfully concluded this year’s version of its annual Young Entrepreneurs competition, which was held online for the first time ever on Tuesday July 7 2020. The virtual competition witnessed 21 student companies from 13 high schools and 8 universities in Bahrain as they presented their projects virtually to the competition’s judging panel.

The two-day event ran a busy agenda starting off with an Assessment Day on July 6, where students in the High School and University tracks commenced with panel interviews with the judges. The final day of the competition featured the virtual award ceremony where the winning teams were announced and livestreamed on INJAZ Bahrain’s YouTube channel.

The competition witnessed great enterprising and entrepreneurial spirit which was brought forward by the participating students from around the Kingdom in their competition to obtain the coveted “University Company of the Year” and “High School Company of the Year” titles in addition to “University Product of the Year 2020”, “High School Product of the Year 2020”, “University Company for Best Social Impact 2020” and “High School Company for Best Social Impact 2020” awards. Special awards this year include two signature awards – “Excellence in Technology Award” sponsored by Amazon Web Services Bahrain, and “Excellence in Marketing Award” sponsored by the National Bank of Bahrain.

“Shield” from “British University of Bahrain” won the “Excellence in Marketing Award” sponsored by NBB.

H.H Sh. Hessa Bint Khalifa Al Khalifa, INJAZ Bahrain Chairperson, praised INJAZ Bahrain as one of the leading initiatives to support our youth to start their entrepreneurial journeys: “Our vision at INJAZ Bahrain is to create a platform where young people are supported and motivated to channel their innovation and creativity into building a knowledge-based economy through our programmes and partnerships. We believe in the potential of our youth and aim to inspire and prepare them to succeed in the global economy. We are very proud of this year’s student for their commitment and dedication to keep learning.”

Zain Bahrain, a leading telecommunications provider in the Kingdom virtually hosted the 4th edition of ‘Zainnovate’ in partnership with Alkeri Partners, a Bahrain based...
Read more
PR This Week

The Ritz-Carlton, Bahrain continues to elevate the guests’ experience by providing innovative solutions to provide a safe experience amidst the COVID-19 global pandemic with...
Read more
PR This Week

CrediMax announced its latest feature on its Loyalty program “Thameen” where cardholders are now able to redeem their points and “donate” to the Royal...
Read more
PR This Week

Malabar Gold & Diamonds, one of the largest global jewellery retailer has opened two new showrooms in India as part of its global expansion...
Read more
PR This Week

Bahrain’s efforts to combat the novel coronavirus (COVID-19) were highlighted during a webinar held under the theme: “Webinar for Parliamentarians: COVID-19 and Climate Change”. A...
Read more
PR This Week

Named after a rare species of beautiful birds-of-paradise, Cendrawasih, this Balinese dance is a relatively new dance with choreography inspired by classical dance routines....
Read more

Buying a used car can sometimes be an overwhelming experience especially when you will spend your money not being sure of the car issues...
Read more
Inside Bahrain

Bahrain’s efforts to combat the novel coronavirus (COVID-19) were highlighted during a webinar held under the theme: “Webinar for Parliamentarians: COVID-19 and Climate Change”. A...
© GO ALIVE MEDIA
MORE STORIES