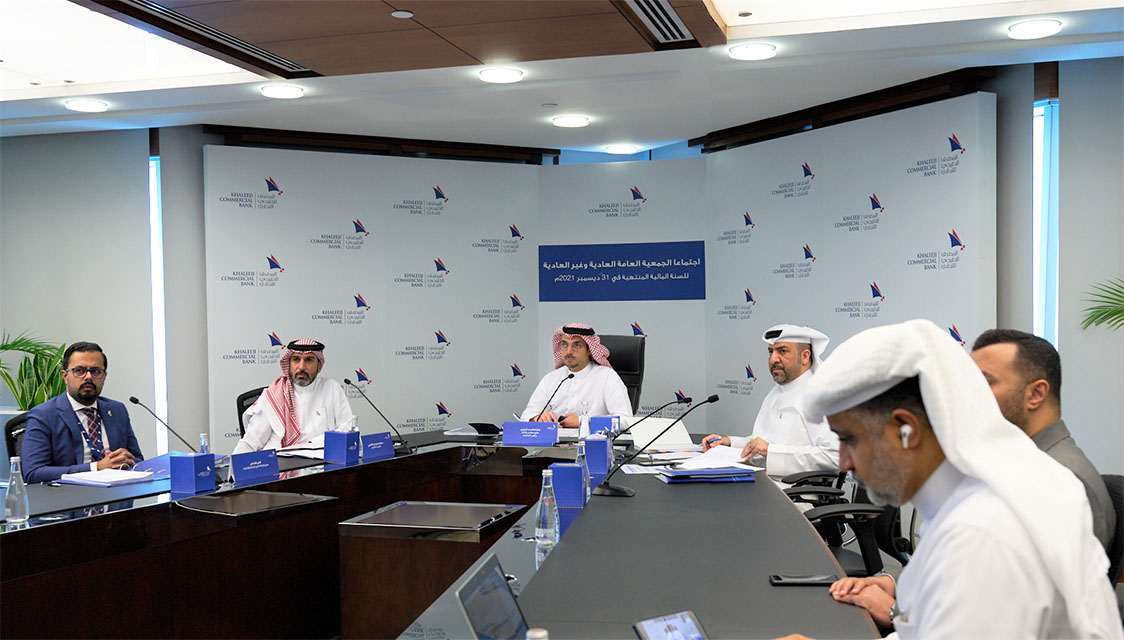 Khaleeji Commercial Bank (KHCB), one of the leading Islamic banks in the Kingdom, held its Annual General Meeting (AGM) on the morning of Thursday 24th March 2022 through a video conference platform and with a quorum of 90.16%. The meeting was chaired by Mr. Hisham Ahmed Alrayes member of KHCB’s Board of Directors, in the presence of CEO Mr. Sattam Sulaiman Algosaibi as well as several members of the Board of Directors and Executive Management, with the participation of shareholders, representatives of the Shari’a Supervisory Board (SSB), the external auditors, and supervisory authorities.

The Annual Ordinary General Meeting began with the approval of minutes of the previous meeting, which was held on 24th March 2021. The Board of Directors’ report on the Bank’s business activities for the year ended 31st December 2021 was discussed and approved. The SSB and external auditors’ reports were heard, as well as the financial statements for the year ended 31st December 2021, which were discussed and approved.

The attendees approved the Board of Directors’ recommendation to transfer an amount of BD 1,085,263 to the Statutory Reserve, allocate BD 394,780 to the Zakat Fund, and transfer BD 9,372,584 to Retained Earnings. The attendees also approved the proposal for the distribution of a remuneration to members of the Board of Directors with a sum of BD 135,000 for the year ended 31st December 2021, pending the approval of the supervisory authorities.

Transactions that took place with any related parties or major shareholders during the year ended                  31st December 2021 were authorized, ratified, and approved. The Board of Directors’ recommendation to separate and transfer infrastructure and real estate assets amounting to USD 200 million in exchange for equity and sukuk in Infracorp B.S.C (c), which is an entity owned by the GFH Financial Group, was approved. Furthermore, the Board of Directors were authorized to negotiate and execute the agreement’s terms. The Corporate Governance report for the year ended 31st December 2021 was discussed and approved, alongside the Bank’s compliance with the requirements of the Central Bank of Bahrain (CBB).

The attendees also approved on the proposed amendments to the Bank’s remuneration framework (The Variable Remuneration Policy and Share Incentive Scheme), which was prepared in accordance with the CBB’s requirements. Following the CBB’s approval, the Board of Directors was authorized to make the necessary amendments from time to time, after which its members were absolved of liability for their actions during the year ended 31st December 2021. The Annual Ordinary General Meeting concluded by approving the reappointment of the external auditors for the year 2022 and authorizing the Board of Directors to specify their remuneration, after obtaining the CBB’s approval.

The Annual Extraordinary General Meeting began with the approval of the minutes of their previous meeting held on 25th March 2020, after which the attendees agreed to amend the Bank’s Articles of Association and Memorandum of Association in compliance with legislative decree No. (28) for the year 2020, as well as No. (20), (63), and (64) for the year 2021 to amend certain provisions of the Commercial Companies Law as stated by legislative decree No. (21) for the year 2001 and Ministerial Resolution No. (3) for the year 2022 to amend some provisions of the executive regulations of the Commercial Companies Law, after obtaining the required regulatory approvals. The Board of Directors and Auditor’s reports were heard pertaining to the reasons justifying capital reduction, the Company’s liabilities, and the impact of such reduction on these liabilities.

On this occasion, member of KHCB’s Board of Directors and Chairman of the meeting, Mr. Hisham Ahmed Al Rayes, said: “The decisions made during this meeting represent a positive turning point in the Bank’s progress in light of the outstanding financial results achieved during the past year which are owed to solid foundations established to enhance growth and development, based on principles of creativity and innovation with the aim of providing a leading banking experience that meet our clients’ expectations and aspirations and keeps abreast with modern trends and developments in the banking sector, which has become a primary pillar of the Kingdom’s economy.”

Mr. Al Rayes added: “These decisions will undoubtedly push the Bank’s performance towards broader horizons of growth. We are confident that the year 2022 will bring us many positive developments in view of the facts and the Bahraini economy’s performance, which is steadily moving towards further achievements. In this regard, I would like to extend great thanks to His Majesty King Hamad bin Isa Al Khalifa, may God protect him, for his support of the banking sector, and His Royal Highness Prince Salman bin Hamad Al Khalifa, Crown Prince and Prime Minister, may God protect him, for his leading strategies and plans, especially the economic recovery plan. Not to mention the CBB’s pivotal role in guiding the banking sector towards adopting qualitative initiatives that encourage its growth and prosperity.”

For his part, KHCB CEO Mr. Sattam Sulaiman Algosaibi, said: “The new strategy set by the Board of Directors has proven its responsiveness to recent trends in the banking sector, which yielded an outstanding financial performance during the year 2021, with a noticeable increase in total income in which the Bank earned BD 26.9 million, compared to BD 22.6 million in 2020, coupled with a net profit attributable to the Bank’s shareholders of BD 10.85 million, compared to BD 7.99 million in 2020, at a time where we witnessed a significant increase in asset quality. We are confident that the decisions approved by the Annual General Meetings will enhance our financial performance at various levels.”

Elaborating further, Mr. Algosaibi explained: “The year 2021 distinguished the bank in terms of financial performance and adopted initiatives, through which it realised important strategic goals amidst challenging conditions imposed by the COVID-19 pandemic during the last 2 years. We were keen to utilise opportunities that improved our performance, which included launching a new version of the “Khaleeji Mobile App” to facilitate our clients’ banking operations, in addition launching open banking services through the “Khaleeji 360” portal, enabling clients to link their accounts with other banks and view their aggregated information quickly and easily. The Bank has also opened a new branch in Wadi Al Sail Mall as part of its ambitious plans to redistribute its branch network to ensure proximity to our valued clients. In addition, we were keen to provide easy financing programs to our valued clients during last year, not to mention the “Al Waffer” account’s exceptional success during last year’s edition.”

Mr. Algosaibi concluded, saying: “I would like to extend my sincere thanks and appreciation to the Board of Directors for their unlimited support and sound guidance which impacted the achievement of our major strategic objectives during the year 2021, as well as our shareholders and valued clients for their enduring trust in the Bank, stressing our commitment to more positive results that meet their aspirations during the next phase by seizing promising opportunities to achieve more success and progress. I would also like to express gratitude to the Bank’s work team for their sincere efforts in maintaining our advanced position as one of the leading Islamic banks in the Kingdom of Bahrain.”