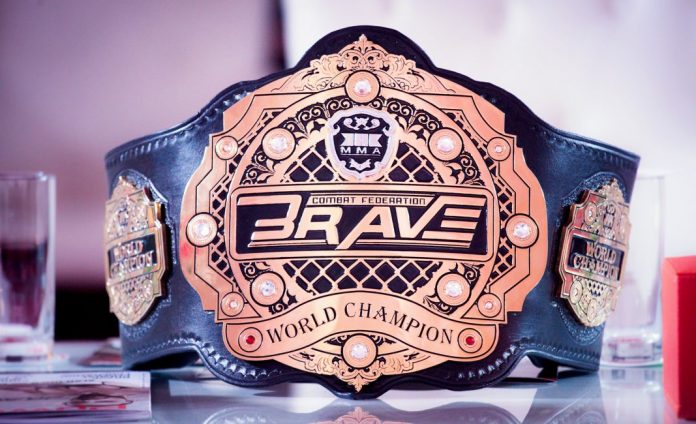 2 Championship Bouts in a single event in Brazil

Bahrain based mixed martial arts promotion which is an initiative under the leadership of His Highness Sheikh Khalid bin Hamad Al Khalifa will hold the eighth edition of Brave Combat Federation in Curitiba, Brazil on 12th August, 2017. This marks the second time that the Bahrain based sports promotion is hosted in Brazil. For the first time 2 championship matches will be held in the event.

In the main event, Timo Feucht from Germany will face Klidson Farias from Brazil in a Light Heavyweight championship title match while in the co-main event, Mohammed Fakhreddine from Lebanon will face Carl Booth from the United Kingdom in a Welterweight Championship title match. The event marks the first time a Middle Eastern sports promotion organizing championship matches in Brazilian soil. Previously the championship match was at Brave 4 held at Abu Dhabi, United Arab Emirates and was between Elias Boudegzdame from France and Masio Fullen from Mexico. Elias won the featherweight championship by submitting the former UFC fighter from Mexico.

The resulting outcome is significant as the Kingdom of Bahrain will be awaiting to host the event during November, coinciding with the 2017 IMMAF Amateur World Championship.

Gulf Air, the national carrier of the Kingdom of Bahrain, announces that starting from 28 January 2021 it plans to move its entire operations...
Inside Bahrain

Ebrahim K. Kanoo, the sole distributor of Toyota vehicles in the Kingdom of Bahrain, welcomed the winners of the 14th edition of the “Toyota...
Inside Bahrain

Bahrain Tourism and Exhibitions Authority (BTEA) urged all hotels and hospitality facilities to adhere to the instructions stated in the ministerial edicts issued by...
PR This Week

Give your Jaguar F-PACE, Range Rover & Range Rover Sport a step up with exclusive offers on side steps from Euro Motors

Euro Motors, the exclusive importer and distributor for luxury automotive manufacturer Jaguar Land Rover (JLR) in the Kingdom of Bahrain, is offering exclusive deals...
Inside Bahrain