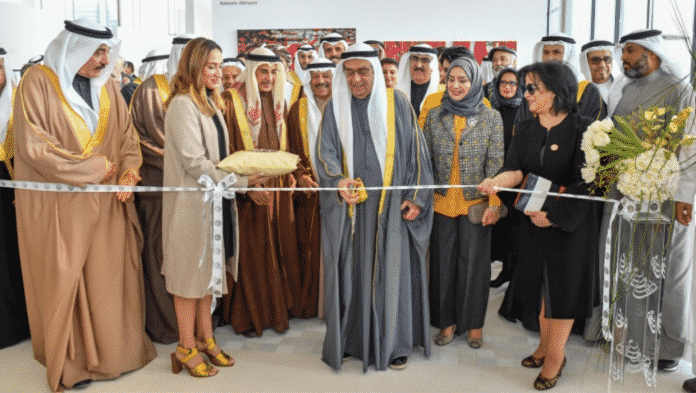 HH Shaikh Mohammed was welcomed by BACA President Shaikha Mai bint Mohammed Al Khalifa. He opened the exhibition and toured its various pieces. He was briefed by Shaikha Mai and the 68 participating artists on the creative artwork exhibited.

“It gives me great pleasure to express my pride on behalf of His Royal Highness Prince Khalifa bin Salman Al Khalifa, the Prime Minister, to open the 46th Bahrain Annual Fine Art Exhibition organized by the Bahrain Authority for Culture and Antiquities,”. HH Shaikh Mohammed said.

“The paintings and artwork that we saw today reflect Bahrain’s deep-rooted and distinguished cultural and artistic movement. Embodied by the participating artists representing various creative schools and tendencies.

“This calls for expressing thanks and appreciation to Her Excellency Shaikha Mai bint Mohammed Al Khalifa. Her continuity of organizing events that embody the richness of the culture and heritage of the Kingdom of Bahrain. In various fields that preserve and highlight them in attractive and expressive ways.”

HH Shaikh Mohammed also expressed appreciation to the participants. Both Bahrainis and residents and wished them further success under the support and encouragement by BACA.

She said that his continuous patronage of the cultural movement in Bahrain in all its details reflects keen interest in the identity of Bahrain. Promoting its most beautiful image to the whole world.

Shaikha Mai also expressed her sincere thanks and appreciation to HH Shaikh Mohammed bin Mubarak. She thanked him for opening the exhibition on behalf of His Royal Highness the Prime Minister.

The exhibition continues to attract artistic creations from the pioneers of the fine art movement as well as from the younger generations who have shown great enthusiastic to participate, she added.

This reflects the vibrancy and diversity of the cultural and artistic movement in Bahrain, adding that by providing space and an appropriate setting for beauty and the arts, Bahrain enhances its civilizational approach and its outreach to people around the world, Shaikha Mai said.

The exhibition will remain open until February 15.

The National Bank of Bahrain (NBB) has announced that it is has extended its support to its Commercial and SME customers impacted by the...
Read more
iGA

Zain Bahrain, a leading telecoms operator in the Kingdom, has introduced Be Safe initiative to encourage customers to utilise all Zain digital channels to...
Entrepreneurial Journey

Following the directives of the Government encouraging caution and social distancing, and in line with its continuous efforts to safeguard the well-being of its...
Sports This Week