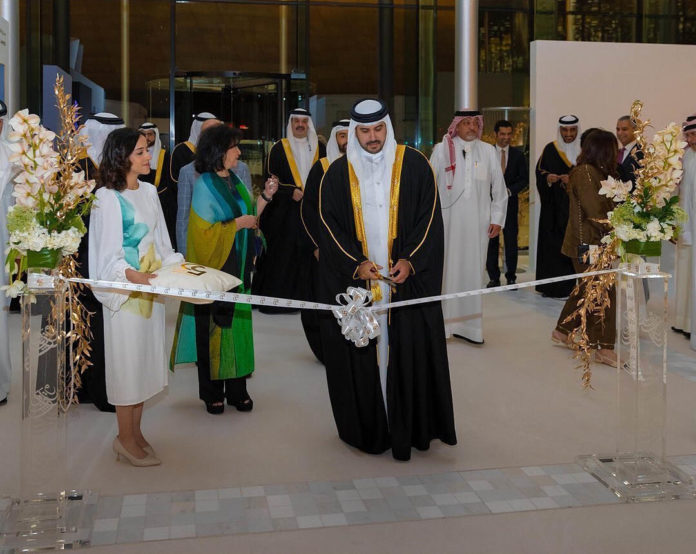 On behalf of HRH Prince Salman bin Hamad, HH Shaikh Mohammed bin Salman expressed his appreciation for the honour of opening the exhibition, and his pride in the creative contributions made by the exhibition’s Bahraini and resident artists, as one Team Bahrain.

HH Shaikh Mohammed bin Salman noted that the annual exhibition has provided a longstanding platform for showcasing the most prominent figures of the Kingdom’s fine art movement, its pioneers and young talent.

HH Shaikh Mohammed bin Salman then toured the exhibition and was briefed on its galleries of over 100 works of art by 60 Bahraini and resident artists. The art pieces reflect different schools, artistic trends and artforms, including paintings, video artwork, photography, and sculpture.

For her part, HE Shaikha Mai bint Mohammed Al Khalifa extended her gratitude to His Royal Highness Prince Salman bin Hamad Al Khalifa, the Crown Prince and Prime Minister, for sponsoring the 48th edition of the Bahrain Annual Fine Arts Exhibition, noting that HRH’s support for cultural exhibitions enhances Bahrain’s progress across the arts and culture sector, regionally and globally.

HE Shaikh Mai further expressed her gratitude to HH Shaikh Mohammed bin Salman for inaugurating the exhibition on behalf of HRH the Crown Prince and Prime Minister.

HE Shaikh Mai noted that the opening of the Bahrain Annual Fine Arts Exhibition this year confirms the recovery of the economy, and the cultural economy in the Kingdom and the return of life to normal, post-pandemic. HH Shaikha Mai further noted that the exhibition enhances the Kingdom’s fine art movement, providing a rich supportive environment for the Kingdom’s creative industry.

During the exhibition, the winners of the three annual awards were as follows: the first place Al-Dana Award was won by Jaafar Al-Araibi, second place was won by Maryam Al-Noaimi and Nouf Al-Rifai came in third place.

The Bahrain Annual Fine Arts Exhibition is one of the largest and most prominent annual artistic gatherings held in the Kingdom of Bahrain. Over the years, it has attracted the most important artists in the Kingdom, including young artistic talents.

A number of senior officials also attended the opening.