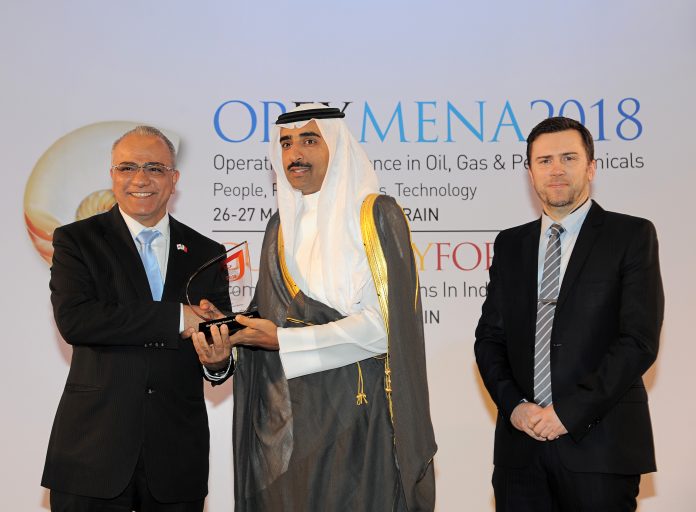 Aluminium Bahrain B.S.C. (Alba), one of the world’s leading smelters for promoting safety culture, is the proud recipient of the Gulf Safety Forum Award during its second edition which was held from 28 to 29 March 2018 at the Crown Plaza Hotel, Bahrain.

The Deputy Chief Executive Officer Ali Al Baqali received the Award on Alba’s behalf, which was presented by His Excellency the Minister of Oil Shaikh Mohammed bin Khalifa Al Khalifa, in recognition of the Company’s continuous efforts to improve the Safety and Health of its employees and contractors alike as well as promote environmental initiatives.

On this occasion, Deputy Chief Executive Officer, Ali Al Baqali, said:
“We are proud to receive the Gulf Safety Forum Award, which is another testimony to Alba’s uncompromising commitment to ensure a safe and healthy working environment for all its employees.

This recognition will further encourage us to boost our efforts and push the envelope as we head towards the completion of our flagship project – Line 6 Expansion Project.”

Organized by the Euro Petroleum Consultants (EPC) and held under the patronage of His Excellency the Minister of Oil Shaikh Mohammed bin Khalifa Al Khalifa, the Forum included distinguished international experts and renowned speakers in the field of Safety, Health and Environment. Also present at the awarding ceremony were SHE Senior Manager Mohamed Khalil Saeed and Safety Superintendent Hesham Abdullah who presented a paper in the conference.