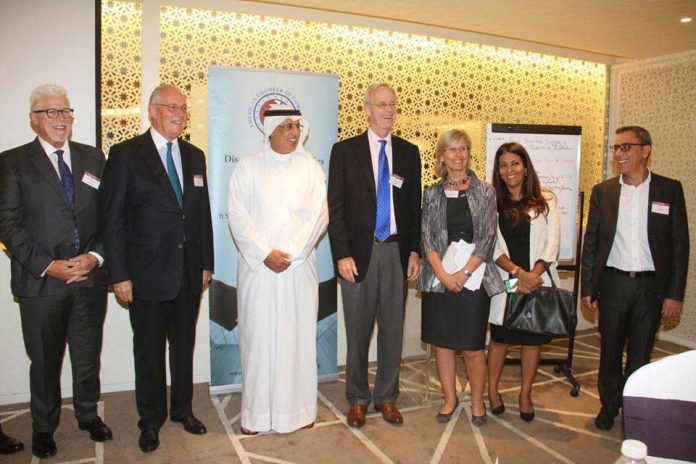 The American Chamber of Commerce in Bahrain (AmCham Bahrain) announced today the successful conclusion of the election of its Board Officers at its first Board of Directors meeting following its Annual General Meeting (AGM) and full Board election which was held at the Capital Club on 26 September 2017.

Presided over by Mr. Qays H. Zu’bi, President of AmCham Bahrain, in the presence of its outgoing Board of Directors, esteemed members, U.S. Ambassador William Roebuck, and guests, the AGM focused on highlights and successes from the year.  Mr. Zu’bi opened the meeting acknowledging “Tonight’s meeting importantly acknowledges and recognizes the positive transition, accomplishments, and growth enjoyed by AmCham over the past two years, as well as, the election of a new Board of Directors and AmCham’s vision for the next term 2017-2019. AmCham’s success has been a team effort led by its board fully supported by its members.”

The AGM was followed by a dinner, attended by guest of honor HE Zayed Alzaynai, Minister of Industry, Commerce, and Tourism, and the premiere screening of a new video highlighting the benefits of the US-Bahrain Free Trade Agreement (FTA) and featuring several FTA success stories.  Introducing the video, Mr. Zu’bi stated “Bilateral trade including goods and services between the US and Bahrain was $3.6 billion in 2015.  This significant increase in trade since 2005, before the FTA went into effect, speaks for the success of the FTA.  This video will be used to help promote awareness of the FTA to companies investing in Bahrain and to SMEs wanting to enter the US market.”

At the first board meeting following the AGM, the Board Directors elected their Officers for the 2017-2019 term.  In this regard, Mr. Zu’bi who was re-elected as President stated “I am delighted and honored to be given the opportunity to serve as President for another term.  With the full support of our members, I am confident that the pool of skills, expertise, and resources within this board will be instrumental in strengthening AmCham and further developing it.”  Mr. Zu’bi added, “We will continue to extend AmCham’s contribution to promoting U.S.-Bahrain’s trade growth, while also promoting the legitimate economic interests of AmCham members.”

Mr. Zu’bi went on to highlight AmCham’s vision within the framework of the Free Trade Agreement for the coming term by explaining “It is AmCham’s vision, in cooperation with local associations, government, and quasi-government bodies, to support economic growth and environmental progress in Bahrain; Support the private sector and free enterprise and create opportunities that foster innovation and investment in technology-related industries;  Support efforts to upgrade the legal system to enable it to respond faster, simpler and fairer; Support the launch of new businesses and the expansion of current ones to enhance economic growth and job creation; And enhance women’s programs and empower them to grow their businesses.

The National Space Science Agency (NSSA) has announced its online registration for university and high school students to participates in the NASA Space App...
Tech