BAE Systems concluded its participation at the Bahrain International Airshow, which was held at the Sakhir Air Base from 21-23 January 2016 under the patronage of His Majesty King Hamad bin Isa Al Khalifa, King of the Kingdom of Bahrain. The company was also pleased to be the Platinum sponsor of the inaugural Manama Air Power Symposium, which was held at the Sofitel Hotel on Wednesday 20 January.  Sir Glenn Torpy, Senior Military Adviser for BAE Systems and Chairman of the RAF Museum, moderated the event.

BAE Systems’ participation was highlighted with the 200th anniversary of the close relationship between Bahrain and the UK, which dates back to the 19th century, when a treaty of protection was signed between the British Government and the Sheikh of Bahrain.

Andrew Wilson, Bahrain General Manager, BAE Systems, said: “We realise the importance of the Bahrain International Airshow as one of the flagship events on the regional aviation calendar. BAE Systems has been a frontline supporter of airshows and aviation exhibitions worldwide, and our participation in this wonderful event is in line with our strategy.”

BAE Systems, in partnership with the Royal Air Force Museum, developed a Heritage Display, focussing on the UK’s Military and Civil Aviation involvement in Bahrain from the 1920s to present day. The display included the iconic Second World War Spitfire fighter, the Anson, which was used to establish the Gulf Aviation Company – to become Gulf Air at a later stage, the Vickers VC-10, the Blackburn Beverly.

The Show’s first day also marked the 40th anniversary of the inaugural flight of Concorde into Bahrain on 21 January 1976, when the aircraft made the world’s first supersonic commercial flight. Concorde was manufactured by the British Aircraft Corporation, a predecessor company of BAE Systems.

BAE Systems also introduced its Eurofighter’s Typhoon Cockpit Simulator, where visitors and delegates were able to experience what it’s like to fly one of the most advanced swing-role combat aircraft, virtually. Demand on the simulator was high, reflecting the interest and passion of the exhibition visitors.

The Show visitors were mesmerized with the Eurofighter’s Typhoon display in the skies of Bahrain. The daily display, carried out by Jonny Dowen, the RAF display pilot, was one of the highlights of this exceptional aviation event.

The iconic Second World War Spitfire was on display beside the BAE Systems’ stand. The aircraft, which arrived in Bahrain in sections, was assembled over two days prior to the opening of the Show by six Bahraini students from the Gulf Aviation Academy, Bahrain Air Services and AFAQ, the Institute of Aviation Technology. 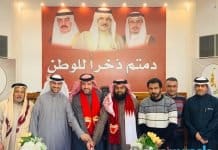 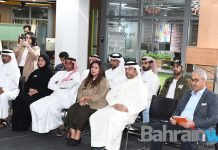