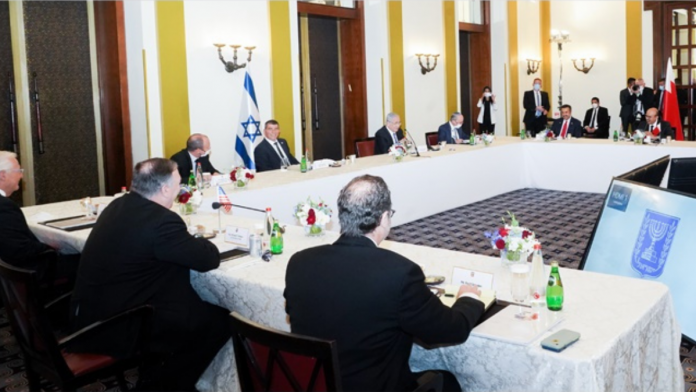 The Kingdom of Bahrain and the State of Israel have agreed to start operating flights commercial flights and initiate procedures to open embassies, based on the Memorandum of Understanding concluded between the two countries for cooperation in the field of air services.

The talks focused on discussing areas of joint cooperation  and the Bahraini-Israeli memoranda of understanding signed in Manama recently in light of the declaration supporting peace and Abraham Accords.

In a statement to the media, Dr. Alzayani thanked the Israeli Government for inviting and received the Bahraini delegation as well as the condolences on the passing of late His Royal Highness Prince Khalifa bin Salman Al-Khalifa.

“The joint talks will contribute to developing cooperation between the Kingdom of Bahrain and the State of Israel in the areas of trade and investment, emerging projects, the banking sector, health, education, communication, technology and innovation”, he said,  adding that both countries have done intensive work to open embassies and finalise the joint visa system, according to the applicable regulations

Regarding the memorandum of understanding for cooperation in the field of air services signed recently, he stated that, starting from the beginning of 2021, 14 weekly flights will operate between Bahrain and Tel Aviv, as well as other airports including Eilat and Haifa airports, as well as 5 weekly cargo flights.

The Foreign Minister stressed the importance of these steps in developing cooperation between the two countries in the fields of tourism and trade.

Under Secretary for Civil Aviation Affairs at the Ministry of Transportation and Telecommunications Mohammed Thamer Al-Kaabi said the signing of the Memorandum of Understanding for cooperation in the field of air services will contribute to building a successful economic partnership between the two countries.

He highlighted common interests that Bahrain and Israel possess, noting that the memorandum of understanding includes direct flights between the two countries, whether for passengers or cargo flights, which will activate Air traffic and inter-tourism

He underlined the advanced level Bahrain and Israel have reached in terms of the security and safety of civil aviation and environmental protection for this important sector, which has become of interest to the international community.

He underscored the crucial importance of this vital industry, especially in light of the global economic conditions and challenges that the world is witnessing.