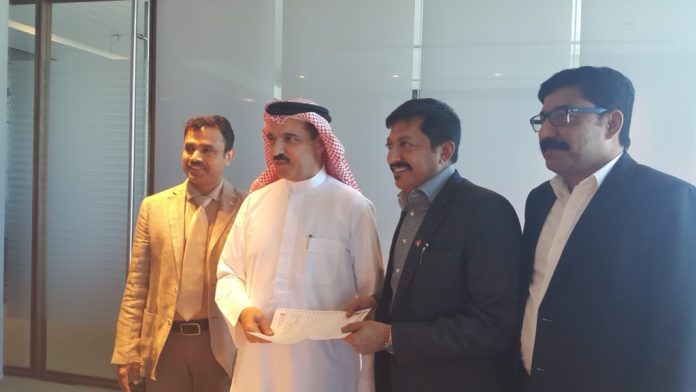 Bahrain Cinema Company, market leaders in the entertainment industry in the Kingdom of Bahrain, also known as Cineco, announced the signing of a major corporate deal with The Coca-Cola Bottling Company whereby the full range of Coca-Cola products will be made available to moviegoers in all of the cinema locations owned by Cineco.

On this occasion, Mr. Ahmed Rashed, C.E.O of Bahrain Cinema Company (Cineco) said: “It is with great pleasure that I announce this valuable new partnership with The Coca-Cola Bottling Company as their products are renowned the world over for their excellent standards, aggressive customer satisfaction policies and their superior products. The impressive work rate by which they distributed their products to all our outlets, the tangible efficiency of the machines that were imported from the U.S. and the extensive and comprehensive reach of their distribution strategy reflect their excellent work ethics and we are proud to be partnering with such a well-regulated company.”

“Additionally, we are honored to be their preferred choice for the launch of the ‘Cinema Tower’ Machines and are delighted to announce that these new innovative, unique and first of its kind in the Middle East service will serve to greatly expedite the process of buying refreshments by reducing the queues, thereby immensely supplementing the movie experience and making it all the more pleasant. We look forward to reveling in the fruits of this productive new collaboration as it is in the best interests of our cherished customers and to basking in the positive feedback from them subsequent to the completion of the augmentation of their movie experience,” he added.

Mr. Mohammed Akeel, Managing Director of The Coca-Cola Bottling Company said, “We are extremely pleased with this high powered alliance with Cineco. Coca-Cola will deliver immense value and refresh moviegoers as they enjoy with their family and friends. A universally loved, quality beverage, Coca-Cola will continue to bring people together, spreading happiness in the process. In the near future, we will be launching many more new products as well for our cinema fans to exponentially increase their attraction towards the already established Cineco movie experience.  Additionally, Arwa water, the market leader in the bottled water industry, will also be made available and sold in tandem at all the Cineco locations.”

Mr. Muralidhar Kotacherry, the Marketing Director of Bahrain and Qatar, said, “We will be installing the latest ‘Cinema Tower’ Machines to dispense a wide range of our products exclusively at the Bahrain City Centre and the Seef Mall cinema outlets as well. These machines are being introduced for the first time in the Middle East and we are proud to launch these ‘Cinema Towers’ in association with Cineco, at all their cinemas as it is the quality of the experience they offer that attracted us towards our mutually beneficial cooperation.”

Bahrain Cinema Company already screens the latest movies in 44 plus cinemas in the Kingdom of Bahrain, reaching approximately 11,200 viewers daily and will greatly supplement these figures in its current expansion plans with the introduction, in early 2016, of six new cinemas at the new Wadi Al Sail Mall. The new Cineplex will have the impressive capacity of 809 seats and will encompass the latest in technological advancements in the global entertainment industry. The total value of Cineco’s investment in this project is $6.5 million and it further consolidates the company’s current position as leaders in the entertainment industry in Bahrain.

Cineco Operations include the management of a large number of cinemas and restaurants within Bahrain and the G.C.C countries.

From humble beginnings in 1968 in Bahrain, Cineco succeeded over the years by pioneering many firsts, establishing benchmarks in Bahrain’s entertainment industry.

Cineco now owns and operates a total of 44 cinema screens in the Kingdom of Bahrain, and 27 screens in Qatar.

Motorcity, the exclusive distributor of Maxus vehicles in Bahrain has delivered a fleet of five Maxus V80 vehicles to Babasons, a leading supermarket chain...
Read more
Inside Bahrain

UCO Parents Care Centre was founded in 1994 as an initiative of UCO Marine Contracting Co. and with support of the Ministry of Health...
Read more

INJAZ Bahrain has recently concluded the fifth edition of its annual program, “INJAZ Talk”. The virtual talks were held remotely through a series of...
Read more
PR This Week

Director General of the International Organisation for Migration (IOM), Antonio Vitorino, praised the efforts made by the Kingdom of Bahrain to rectify the conditions...
iGA

The Rotary Club of Salmaniya held it’s 8th virtual meeting on May 20th 2020 on zoom. In the spirit of the Month of May...
Entrepreneurial Journey

The decade of 1995 gave a strange turn to my life. I describe that period with the borrowed title of a movie- The good,...
Management Principles

The National Taskforce for Combating the Coronavirus (COVID-19) held a press conference at the Crown Prince Centre for Training and Medical Research at the...
© GO ALIVE MEDIA
MORE STORIES