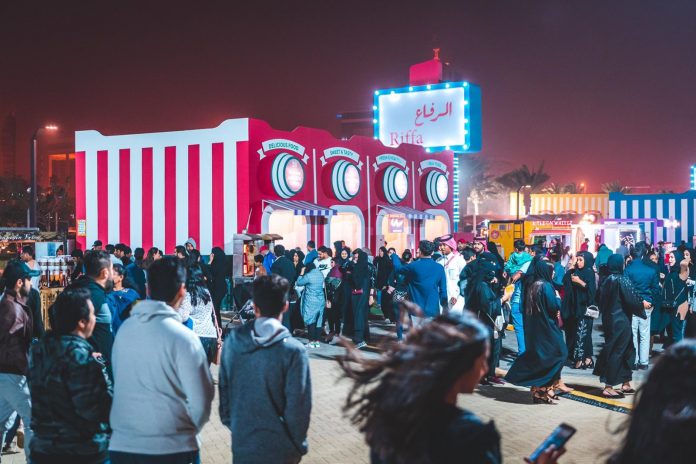 The fourth edition of Bahrain Food Festival continues to attract record numbers of visitors achieving an unprecedented level of success. In the first week alone, more than 150,000 people visited the festival which was launched on Thursday, February 28 2019, which is expected to attract even greater numbers in the upcoming period.

“The festival contributes in positioning Bahrain as the tourist destination of choice for food lovers, and also supports various other food related sectors, thereby fueling the development and growth of local enterprises which contributes to the local economy as a whole,” he added.

Hosting the Bahrain Food Festival comes in line with the strategic vision of Bahrain Tourism and Exhibition Authority (BTEA), which seeks to enrich the tourism sector by organizing a variety of tourism initiatives which work towards enhancing Bahrain’s position as a regional destination in the culinary world.

Since its launch in 2016, Bahrain food festival has continued to attract food enthusiasts from the both the Kingdom and the neighboring GCC countries, in light of the sheer variety of the fun-filled activities and entertainment suitable for the entire family, including: world class live demonstrations by internationally acclaimed chefs, live musical performances by various bands, and a variety of games, to name a few.

In this year’s fourth edition, a total of 108 participants took part all related to the food industry, ranging from restaurants and cafes, to nutrition and culinary equipment; 81 of which are local along with 73 up-and-coming outlets. The festival offered visitors an assortment of cuisines such as Middle Eastern, Western, Asian, Indian, Organic, and Healthy.

The strategic partners of the 4th edition of Bahrain Food Festival 2019 include Batelco and Al Osra; the others partners include Awal Gas, Gulf Finance House (GFH), Bahrain Bay, The Avenues Bahrain, House of Uniforms and IKEA.

Y.K. Almoayyed & Sons, the sole distributor of Nissan vehicles in the Kingdom of Bahrain is proud to have hosted a special delivery ceremony...
Read more
Sports This Week

BRAVE Combat Federation, a product of His Highness Shaikh Khaled bin Hamad Al Khalifa's vision, is back to holding events across the world, taking...
Inside Arabia