At times we come across those individuals... 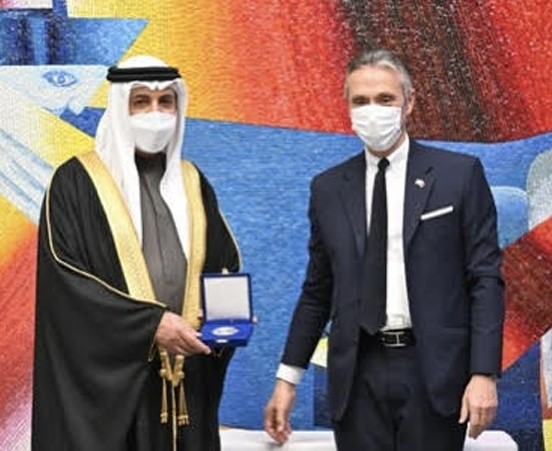 France and Bahrain have celebrated their 50 years of diplomatic relations amid renewed commitment by the two countries to boost ties, strengthen partnership, and widen cooperation across various areas.

The French embassy in Manama hosted a ceremony that highlighted the multidisciplinary French presence in Bahrain and the strong deep-rooted ties between the two countries.

The undersecretary expressed pride in the robust relations, noting the exchange of expertise during these years of coordination in all fields.

“We are very glad to see the continuous positive momentum of growth between the two countries in political, economic, cultural, and education fields and many others,” Dr. Shaikh Abdullah said.

“We are very glad to see the development in our trade volume between Bahrain and France. And in the educational sector, I can note the increase of Bahraini students studying in France. Today we can see that the French language is taught in both public and private schools and in higher education.”

The event unveiled the logo of 50 years of diplomatic relations, which will be labelled on many events that will take place during the year to celebrate the Franco-Bahraini friendship.

“There will be several celebrations including a big economic event in March, the French National Day in July, and by the end of the year we hope to have the Bilateral Committee for Cooperation in Paris, so we have a big program,” Cauchard said.

The ambassador recalled the special bonds of friendship and trust that have linked the two countries, diplomatically for 50 years, and much longer historically.

He noted the strategic importance of Bahrain in the region and its often-pioneering role in many areas.

“The Kingdom’s openness on the world, which has existed for thousands of years, has been further strengthened over the past fifty years, driven by an internationally recognized concern for coexistence between cultures and religions and a strong desire to work for peace and dialogue. In such developments, the friendship between France and Bahrain has taken its rightful place,” the French ambassador said.

The celebration at the embassy included the unveiling of an artwork of four parts created by two young French artists, Arnaud Rothfuss and Marylou Hebert, and two young Bahraini artists, Salman Aljar and Mohamed Aref.

The piece of art symbolizes the closeness of the two countries and illustrates the present and the future of the Bahraini-Franco friendship.