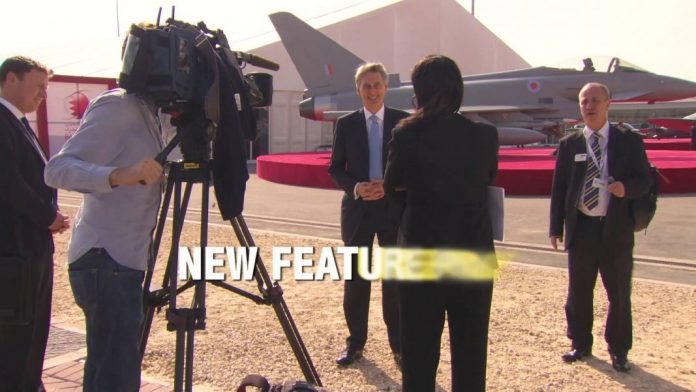 Taking place from 21st– 23rdJanuary 2016 at Sakhir Airbase, the show will see representation from the US, UK, France, India, Russia and Turkey. Furthermore, the high level aviation event will also see more participation from MENA states, with the largest participation yet from the Kingdom of Saudi Arabia, from which numerous companies including Saudi Arabian Airlines will be joining for the first time, alongside Kuwait Airways, Emirates and previous attendees Qatar Airways. Multi-national organisations to date include Airbus, BAE Systems, Boeing, Chevron, CFM, Finmeccanica, Lockheed Martin, Rolls Royce, Turkish Aerospace Industries, TAG Aeronautics and Thales Group.

The exhibition feature hall at the show has also allowed a growing number of international SME businesses to attend the show with national pavilions from the India, Saudi Arabia, Taiwan and the UK.  The popularity of the feature hall, which was introduced at the last edition of the show in 2014, has resulted in a size increase of almost 50% for 2016.

Speaking about the growing international participation, His Excellency Engineer Kamal bin Ahmed Mohammed, Minister of Transportation and Telecommunications for the Kingdom of Bahrain and Deputy Chairman of the Supreme Organising Committee for BIAS said, “The Bahrain International Airshow is a real platform for trade and business.  With so many countries represented, it allows businesses to bolster and build new partnerships. With the value we bring through our extensive delegations programme we offer all our participants the opportunity for extensive networking and discussion.”

Amanda Stainer, Commercial Director for Farnborough International Ltd, added, “With the show just a few weeks away, we are delighted at the positive response to the event. All our Chalets are now sold and just one space remaining in the exhibition hall. The Delegations programme is also very strong with 34 countries represented from 75 delegations. Aircraft participation now stands at over 100 aircraft including the Russian Knights, two Eurofighter typhoons, a T129 ATAK helicopter for Turkish Aircraft Industries, and an F-22 from the USAF to name just a few”.

Now in its fourth edition, BIAS is a focused global aviation event providing its elite list of aerospace business participants the opportunity for high-level networking in exclusive surroundings. With just 40 chalet participants and dedicated exhibition space, the event allows participants the opportunity to meet the extensive civil and military delegations invited as guests of HH Shaikh Abdullah bin Hamad Al Khalifa – HM the King’s Personal Representative and Head of the Supreme Organising Committee of BIAS.

The National Health Regulatory Authority (NHRA) has authorized the emergency use of Johnson and Johnson’s vaccine for coronavirus (COVID-19). Janssen Covid-19 Vaccine is the fifth...
Read more
Wheels and Gears

The S-Class stands for the fascination of Mercedes-Benz: legendary and traditional engineering expertise which defines the luxury segment in the automobile industry. The new...
Read more
Sports This Week

BRAVE Combat Federation’s Asian Domination show will be headlined by two of the top Lightweights in the continent in Abdisalam Kubanychbek, from Kyrgyzstan, and...
Read more
Inside Bahrain

KHK MMA head coach and BRAVE CF Super Lightweight World Champion Eldar Eldarov was welcomed back upon his return to Bahrain after defending his...
Inside Bahrain

The National Health Regulatory Authority (NHRA) has authorized the emergency use of Johnson and Johnson’s vaccine for coronavirus (COVID-19). Janssen Covid-19 Vaccine is the fifth...
iGA

Share Your Suggestions and enquiries with Sunni Waqf Directorate via Tawasul!

The process of communicating with the Sunni Waqf Directorate just became easier and quicker as you can now communicate directly with its officials through...
PR This Week

The American School of Bahrain (ASB) has introduced a comprehensive Arabic language and Islamic Studies program as a way of imparting and upholding Bahraini...
PR This Week

Gulf Air, the national carrier of the Kingdom of Bahrain, announces the addition of Singapore to its growing network with 1 weekly flight starting...
Wheels and Gears

The all-new Jaguar F-PACE and F-PACE R-DYNAMIC rev up in Bahrain as Euro Motors, the exclusive importer and distributor for Jaguar Land Rover, launches them...
PR This Week

Bahrain Specialist Hospital, whose internationally recognized Center of Excellence for Women Care and a leading IVF Center in Bahrain, is offering couples a limited...
Inside Bahrain

The proceeds of e-payments for customs duties and taxes has exceeded BD 40 million in 2020, Customs Affairs Director General of Planning and Administrative...
PR This Week

The S-Class stands for the fascination of Mercedes-Benz: legendary and traditional engineering expertise which defines the luxury segment in the automobile industry. The new...
Inside Bahrain

Labour and Social Development Minister, Jameel bin Mohammed Ali Humaidan, has stressed that the outputs of training should meet the needs of the labour...
© GO ALIVE MEDIA
MORE STORIES