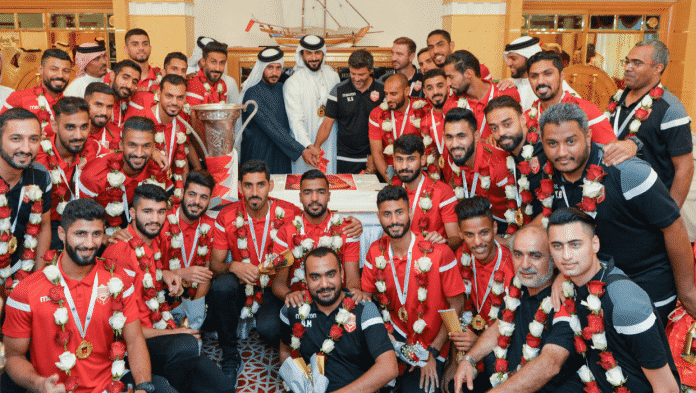 Bahrain, The Champions of WAFF Championship 2019

At the end of a tight combat at the West Asian Football Federation (WAFF) Championship 2019, Bahrain has emerged as the champions of  defeating the hosts Iraq National Team 1-0 in the at the Karbala Sports City.

HH Shaikh Nasser extended deepest congratulations to HM King Hamad on the great achievement attained by Bahraini players at the regional sports gathering, noting that it is the fruitful outcome of HM the King’s support for the youth and sports movement in the Kingdom, and a new milestone that adds to the rich record of honourable accomplishments attained by Bahraini athletes during HM the King’s prosperous era. 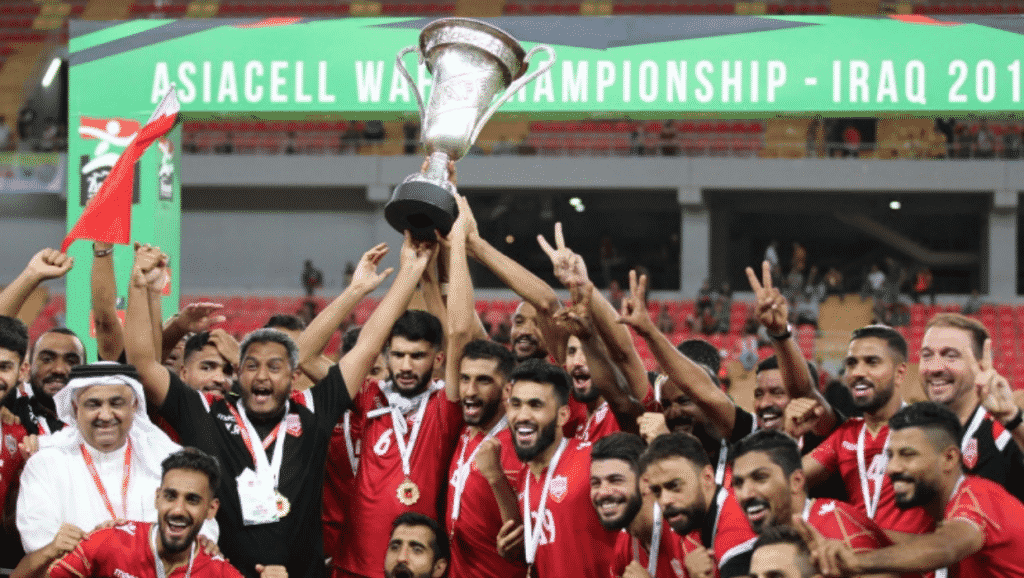 HH Shaikh Nasser affirmed that HM the King’s continued interest in Bahraini sports and support for its affiliates will be a catalyst for doubling efforts to attain more honourable successes.

HH Shaikh Nasser pledged to carry on implementing the royal directives on enhancing sports in the kingdom. 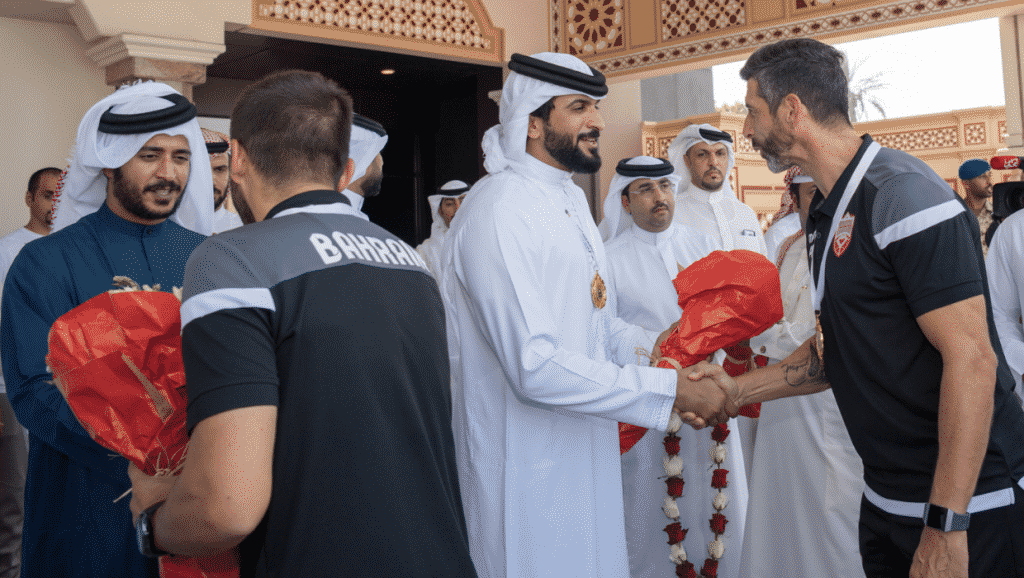 HH Shaikh Khalid congratulated HM the King on Bahrain National Team’s winning the first place in the tournament, describing the achievement as the dividend of the royal support to the sport sector, in general, and football, in particular. He pledged to continue carrying out the royal vision to further develop the sport movement in Bahrain and bring about more victories in the upcoming championships.

Bahrain claimed their maiden West Asian regional title in a tightly contested final in front of a full capacity home crowd, with a solitary strike from Isa Moosa Ali in the 39th minute. The hosts definitely vigorously tried for an equaliser in the reminder of the game, but the Bahrain defence stood strong as they held on for a fourth consecutive victory in the tournament.

Bahrain team had defeated Jordan and Kuwait by 1-0 score lines while holding Saudi Arabia to a goalless draw in the group stages while Iraq had recorded three wins and a draw in their group as they progressed to the final ahead of Palestine, Yemen, Lebanon and Syria.

The victory is a dream start as Bahrain’s new head coach for Portuguese tactician Helio Sousa who guided the national team to their first regional title in his first tournament in charge.

Bahrain is the winner of the ninth edition of WAFF, founded in 2001 as association of the Football playing nations in Western Asia. Bahrain joined among the 12 nations in the Federation in 2010.

She also extended a similar cable of congratulations on this occasion to His Majesty’s Representative for Youth and Sports Affairs and Supreme Council for Youth and Sport (SCYS) Chairman His Highness Shaikh Nasser bin Hamad Al-Khalifa.

She also congratulated the Bahrain Football Association (BFA) chairman and board members, technical and administrative staff and players on clinching the championship and honouring the Kingdom of Bahrain.

The National team arrived in the Kingdom amidst applauds on their victory and was welcomed by HM the King’s Representative for Charity Work and Youth Affairs and Chairman of the Supreme Council for Youth and Sports, HH Shaikh Nasser bin Hamad Al Khalifa.

HH Shaikh Nasser congratulated the players, and described them as the best ambassadors for their country at the regional tournament, noting that they have proved that Bahrainis’ metal is gold and always aim for gold.

HH Shaikh Nasser expressed pleasure at the players’ excellent performance and dedication throughout the tournament, adding that their high morale will stimulate them to attain better results at the coming international championships and gatherings.

HH Shaikh Nasser highlighted keenness to support the national team with all the requirements for success for the future competitions, such as the qualifiers of the World Cup 2022 and the AFC Cup 2023.

H.E. Ayman bin Tawfiq Al-Moayyad expressed sincere thanks and appreciation to HH Shaikh Nasser for his constant support for the national team before and during the tournament, which enabled them to improve their performance for the first place. He asserted that the distinguished performance showcased by the team during the tournament will help them do well at the World Cup and AFC Cup qualifiers.

BFA chief stressed that the exploit is the outcome of the support of HM King Hamad for the sports sector in Bahrain, noting that it adds to the accomplishments of the national team during the Golden Era of sports in Bahrain.

The Captain of the national football team, Sayed Mohammed Jaffar, expressed sincere thanks and appreciation to HH Shaikh Nasser and HH Shaikh Khalid for their constant support for the team on behalf of the players. He affirmed that the ultimate goal for the team was to translate HH Shaikh Nasser’s ‘Gold Only’ slogan into the ground through winning the tournament’s trophy. He extended thanks to all his team mates for the great achievement, pledging to perform well during the upcoming competitions.

A blind student who created a special YouTube channel to teach students with special needs about the use of smart applications has been honored...
Read more
Inside Bahrain

The Charity Work section at the Sunni Endowments Directorate has distributed the Eid Al-Adha gifts and sacrifices, in coordination with charity societies across the...
Read more

One day I read a news item which made me feel annoyed and a bit worried. It was reported that in Mumbai, youngsters from...
Read more
PR This Week

Your next Samsung Galaxy or iPhone may soon include the toughest gadget glass Corning has ever created. The company’s announcing Gorilla Glass Victus —...
Inside Bahrain

The Agriculture and Marine Resources Department at the Works, Municipalities Affairs and Urban Planning Ministry has announced that the ban on shrimping will be...
iGA

A blind student who created a special YouTube channel to teach students with special needs about the use of smart applications has been honored...
Spotlight

Bahraini trucks and their drivers will be allowed to resume their trips to the Kingdom of Saudi Arabia via the King Fahd Causeway today,...
Sports This Week

Eid prayers to be performed at home

Eid prayers in Bahrain will be performed at home at 5:31 am on Friday, the Sunni Endowment Department has said. Mosques will proclaim the traditional...
PR This Week

As part of Accor Premium brands, Mövenpick Hotel Bahrain has received Accor #AllSafe label and was audited and also certified by Bureau Veritas on the 19th...
Inside Bahrain