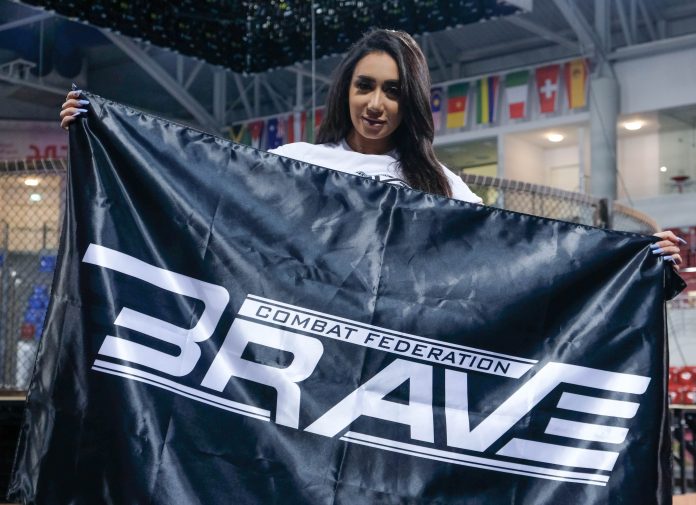 February 26, 2018
Facebook
Twitter
Pinterest
WhatsApp
Linkedin
Bahraini singer, Hanan Redha was honoured as the brand ambassador for Brave Combat Federation to join the promotion’s event in the Hashemite Kingdom of Jordan. Hanan Redha is the first Bahraini woman to have sung the national anthem in public and also among the influencers from Bahrain to be selected by the promotion. Hanan also have a strong online presence across the GCC. The Bahraini singing sensation will join the world tour scheduled by the mixed martial arts organisation for 2018. Hanan Redha will join Hala Al Turk in Jordan as the selected brand ambassadors from Bahrain for Brave Combat Federation.
Strengthening cultural and economic relations through the medium of sports and entertainment had been highlighted as one of the core aims of the initiative. Brave has hinted that more talent from GCC will be joining the ever expanding team of brand ambassadors to tour the world.
“Hanan is one among the most talented and respected Bahraini influencers. It is a great opportunity for her to be the representative of the youth of the Kingdom of Bahrain in front of the world. Joining the world tour alongside Brave Combat Federation will definitely give her more International exposure and diversify her profile. She is the first female influencer to step inside the cage of Brave Combat Federation and had performed the national anthem which is also historic. It is with pride we can welcome Hanan joining us in Jordan”, said Valeria Lang, Chief Operating Officer of Brave Combat Federation.
Facebook
Twitter
Pinterest
WhatsApp
Linkedin
Previous articleDiyar Al Muharraq Hosts a Delegation from Applied Science University
Next articleFirst Motors Launches Exclusive “Worry-Free Ownership” Campaign

Zain Bahrain, a leading telecommunications operator in the Kingdom of Bahrain, fuelled by the passion to empower Bahraini youth with specific skills, recently announced...
Tech