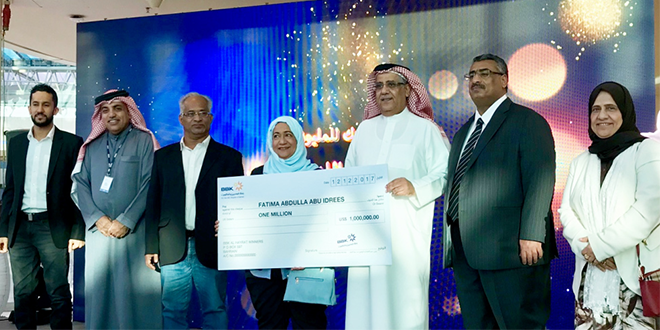 Bahraini Woman is the latest Millionaire from Al Hayrat!

Hayrat, BBK’s unique savings account continues to present its customers with exceptional opportunities to win prizes while they save. Today, an elaborate handover ceremony was held in honour of the latest Al Hayrat winner of One Million Dollars in 2017,  Mrs. Fatima Abdulla Abu Idrees.  Al Hayrat Instant Millionaire was escorted along with her family in a Hummer limousine to the handover ceremony in Seef Mall where BBK’s newest branch was recently inaugurated this past November.  She was welcomed by Mr. Reyadh Sater, BBK’s Chief Executive in the presence of BBK top management.

Speaking at the award ceremony, Mr. Reyadh Sater said: “ I am thrilled to present an additional One Million Dollar prize from Al Hayrat to Mrs. Fatima Abu Idrees!

We had awarded Two millionaires earlier this year, Dr. Azad Qassim who was the 2016 Al Hayrat grand prize winner awarded in February 2017 , followed by Mr. Hesham Noor, who was the winner of the one million dollar prize in May 2017.
I would like to congratulate our latest winner, Mrs, Fatima Abu Idrees on this life changing win that will enable a positive shift in her life as well as her family’s.

The raffle draw took place on November 29th, 2017, under the supervision of Mr. Shafi AlBalooshi of the Consumer Protection Unit at the Ministry of Industry, Commerce and tourism, as well as members of the Bank’s management.
The winner, Mrs Fatima Abu Idrees, a retired Headmistress from the Ministry of Education, was personally contacted by the Chief Executive who asked about her experience with BBK before delivering the life changing news. A mother of 3, Mrs Fatima has been a loyal BBK customer for over 35 years.

A former Head of the Bahrain Women Union, Mrs Fatima is also an activist for woman rights issues.

Mrs. Fatima commented: “I never expected to win per say, but I’m a firm believer that if you do good, good things will come back to you. One can never know when their luck will strike but Alhamdulillah, this is a blessing from Allah. This win will make a significant change in my life, my children’s and my family’s and hopefully help in putting certain postponed goals into action.”

Ms. Abu Idrees added: “The stream of well-wishes, congratulations and prayers has been simply overwhelming and I have been contacted by so many people to congratulate me on this award since the announcement has been made by the bank. The reception has been so heart-warming. I feel very blessed. And I pledge to use a portion of my winnings to give to the poor and needy”

It is worth mentioning that in addition to the Three Al Hayrat Millionaires in 2017 alone, Everyone has an additional opportunity to win the next Grand prize of One Million Dollars  in February 2018 if they deposit before January 1st, 2018.