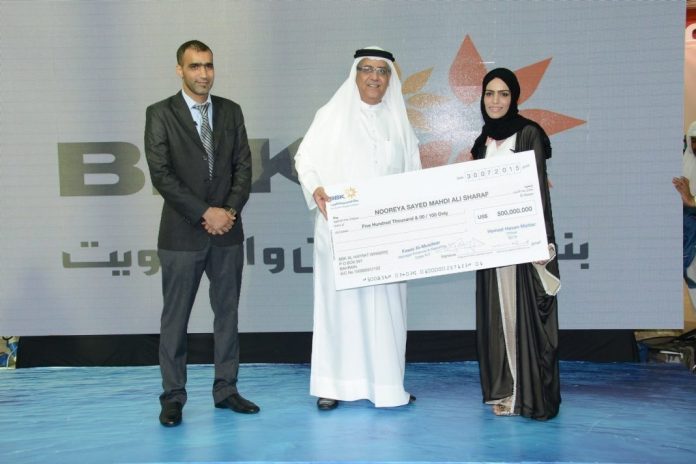 A Bahraini Accountant uses her $500,000 prize from Al Hayrat to start her photography business!

BBK’s unique savings account, Al Hayrat, presents exciting opportunities for customers to win prizes while they save. BBK announced the winner of the Al Hayrat’s Mid-year cash prize of $500,000. Miss Nooreya Sayed Mahdi Ali Sharaf, a young Bahraini accountant at a local medical clinic has been announced as the lucky winner of the Al Hayrat Half Million prize. The raffle draw took place on July 29th under the supervision of Mr. Shafi Al Bulooshi of the Ministry of Industry and Commerce, and members of the top management of the bank.

Upon receiving the news of her win by the Deputy Chief Executive Mr. Reyadh Sater, Nooreya could not believe the news. She said that she had never expected to win such an amazing prize, adding that she had never won anything before.

When asked about her plans for the life changing cash prize, Miss Nooreya said “I have decided that I will use this money to finally start my Photography business which I am currently practising from home. Al Hayrat has given me the chance to do what I actually want and to pursue my passion, it is like a dream come true!”

Speaking at the award ceremony, Mr. Reyadh Sater, deputy Chief Executive said: “Miss Nooreya has been a good customer of BBK’s, and we are very happy indeed to be able to present the cheque for half a million dollars to a loyal customer. I would like to take this opportunity to extend my warmest congratulations to Miss Nooreya and her family on this amazing win. We have structured Al Hayrat prizes in such a way that our customers have a chance to win cash prizes which will truly make a difference to their lives and it’s great to see this play out through Nooreya’s plans to pursue her dreams”.

There are many more exciting prizes to win in 2015, which will end in the Al Hayrat Instant Millionaire year-end prize of $1,000,000 as well as other prizes such as the upcoming Quarter Million draw in October.

Gulf Air, the national carrier of the Kingdom of Bahrain, will resume its direct Athens and Cairo flights with scheduled operations starting from 01...
Read more
PR This Week

Big discounts and amazing prizes are at stake as Al Hawaj and CrediMax opens their “5 Hot Days” promotion from 1st to 5th of...
iGA

Northern Governor, Ali bin Al-Shaikh Abdulhussain Al-Asfoor, has asserted that the disinfection campaigns carried out by the Northern Governorate are part of the national...
Sports This Week

I never thought of advertising my business when I was a small shopkeeper. The word-of-mouth publicity among customers was sufficient for me in those...
© GO ALIVE MEDIA
MORE STORIES