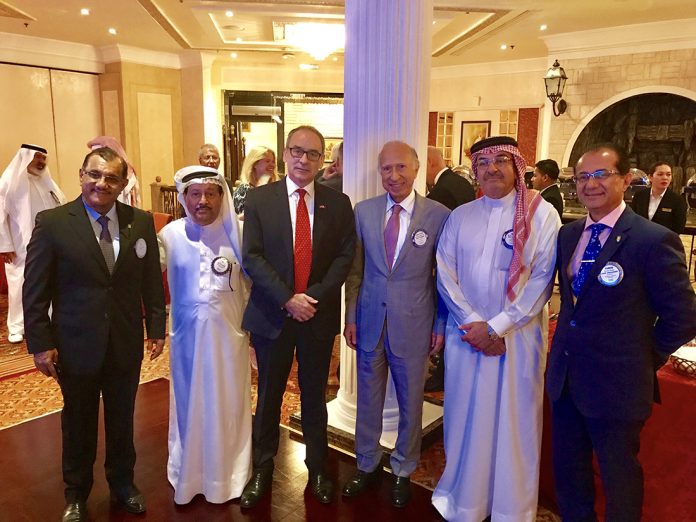 British Ambassador speaks to the Rotary Club of Manama

H.E. Mr Simon Martin, the British Ambassador, regaled members of the Rotary Club of Manama (RCM) with stories from his youth and nearly a quarter century of service in the British Foreign and Commonwealth Office when he addressed a packed meeting of the RCM at the Gulf Hotel yesterday.

He also looked in detail at the 200 years of “partnership” with the Kingdom of Bahrain, citing a “special relationship between the two countries” and its legacy which endures in trade, education and defence.  He also spoke at length about the two nations’ shared values, most especially around religious tolerance about which, he said, Bahrain has an excellent track record which is second to none in the region.

Veteran Rotarian Raheem Abu Omar, the Gulf Hotel’s General Manager, also gave a lively and moving personal presentation about his early life in occupied Palestine, growing up on the West Bank of the Jordan and climbing the ladder of the hospitality business to become one of the most respected hoteliers in the GCC.

stc Bahrain, a world-class digital enabler, is the first telecom operator in Bahrain to venture into Roadside Assistance and Home Assistance services, expanding its...
Inside Arabia

Gulf Air, the national carrier of the Kingdom of Bahrain, announces that it has resumed its direct flights to and from Dhaka’s Hazrat Shahjalal...
Inside Arabia