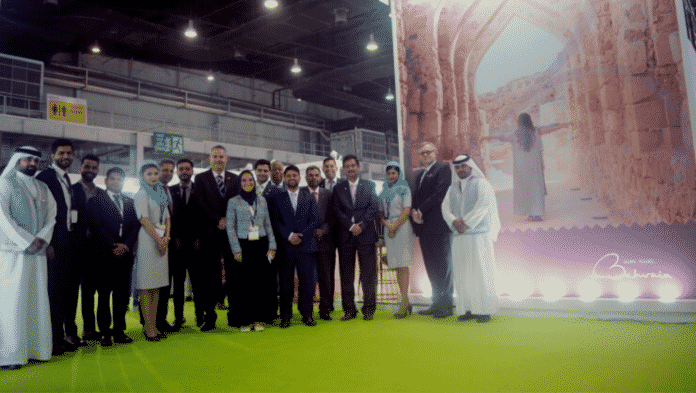 For the first time since its establishment, the Bahrain Tourism and Exhibitions Authority (BTEA) is participating in the 26th edition of South Asia’s leading travel show, SATTE 2020. Supported by the Indian Ministry of Tourism and United Nations World Tourism Organization (UNWTO).

The Formula 1 Gulf Air Bahrain Grand Prix is also being promoted during the event. Visitors at the stand can participate in the ‘fastest lap’ competition. One visitor will have the opportunity to win two Formula 1 tickets. It comes with two airline tickets as well as complimentary accommodation in the Kingdom of Bahrain.

“Through BTEA‘s participation in SATTE 2020, we aim to highlight the Kingdom of Bahrain’s tourism potential. We will introduce tourism projects to the Indian market as we strive to further develop the Kingdom’s tourism sector. Last year, we witnessed a significant increase in the number of inbound tourists from India. ” Said the Acting Director of Marketing and Tourism Promotion Directorate at BTEA, Dr. Ali Follad.

“Similar to our arrangement with BTEA’s representative offices across the world. We have the opportunity to work closely with our representative office in India. Collaborating with accredited travel agents and well-known international tour operators to offer tailor-made travel packages. We aim to attract more tourist delegations to the Kingdom of Bahrain. Ultimately, we want to place Bahrain on the global tourism map. Strengthening its position as the ideal tourism destination, known for its family entertainment and hub of trade,” he added.

Each year, this annual event witnesses the participation of more than 1,000 participants from over 50 countries, 28 Indian states, and 90 cities from across India. The event brings together decision makers, the largest global travel and tourism companies and their peers in the South Asia region,as well as representatives of government agencies and the Indian tourism market; all under one roof with an aim of promoting their tourism offerings and establishing commercial and business partnerships.

BTEA’s participation comes in line with its long term strategy to further develop the Kingdom’s tourism sector and strengthen its position on regional and international levels under the slogan of ‘Ours. Yours’, which contributes towards the Kingdom’s economy and the 2030 Economic Vision.

As leading technology companies are planning to make remote working the ‘new normal’ and users of major virtual conference services such as Zoom and...
Sports This Week