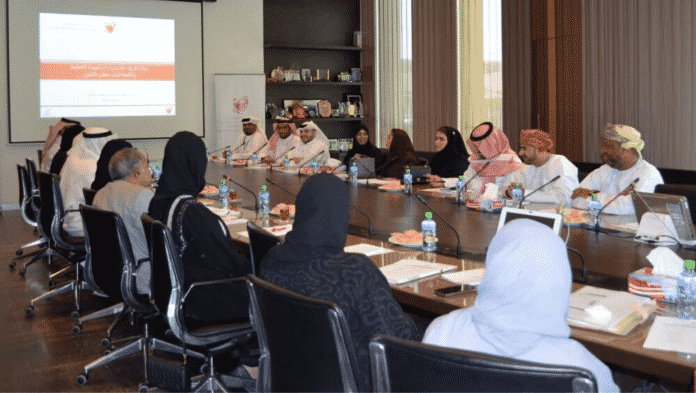 A constant flow of statistics made available to strategists and decision-makers is vital to the development process including operational data used for decision-making and the measurements of the impact of those decisions on the public and private sectors, Information & eGovernment Authority (iGA) Deputy CE, Statistics & Population Registry Dr. Nabeel Mohammed Bin Shams – explained – while receiving representatives of the GCC planning and development governmental entities, whom were visiting the Kingdom of Bahrain as part of a program arranged by Ministry of Finance and National Economy for knowledge exchange .

Dr. Bin Shams welcomed the GCC delegation , and provided an overview of the role played by the iGA in providing statistics to policymakers, explaining the importance of having a measurement of the local impact of decisions taken by the leaders of GCC countries, which will subsequently support the development of future strategies for the Gulf countries.

He explained that among the iGA’s responsibilities is the population census, an important activity supported by information obtained by the Population Registry during the issuance of identity cards for citizens and residents. He added that Bahrain has implemented an automated smart census since 2019, through which it is able to produce periodical statics.

The meeting also reviewed key statistical indicators related to GCC nationals, including a demographics overview, as well as an outline of the 2020 census that the iGA is currently preparing. They also discussed the main economic statistics and indicators issued by the department, including national production and consumer price indices.

The Commission also presented its experience in surveying foreign trade, foreign investment and tourism, data on which is issued periodically in cooperation with relevant authorities. They discussed the Kingdom’s progress in gathering comprehensive annual data related to tourism and travel, which saw Bahrain jump 31 spots on the World Economic Forum’s 2019 Travel and Tourism Competitiveness Index.

The delegation, which included experts and decision-makers from the ministries of economy and planning of Saudi Arabia, the United Arab Emirates and the Sultanate of Oman, and from the GCC General Secretariat, praised the efforts of the Kingdom in the field, wishing them further development and progress in their work.

The visit comes within the framework of a program to exchange experience and expertise among the GCC countries over the 20th and 21st of November. It implements a decision on the continuation of meetings between technical officials responsible for preparing development plans, which was made at the 27th meeting of the GCC Ministerial Committee for Planning and Development in June.

Southern Governor His Highness Shaikh Khalifa bin Ali bin Khalifa Al Khalifa met  through his virtual Majlis with a number of citizens from the...
Read more
Inside Bahrain